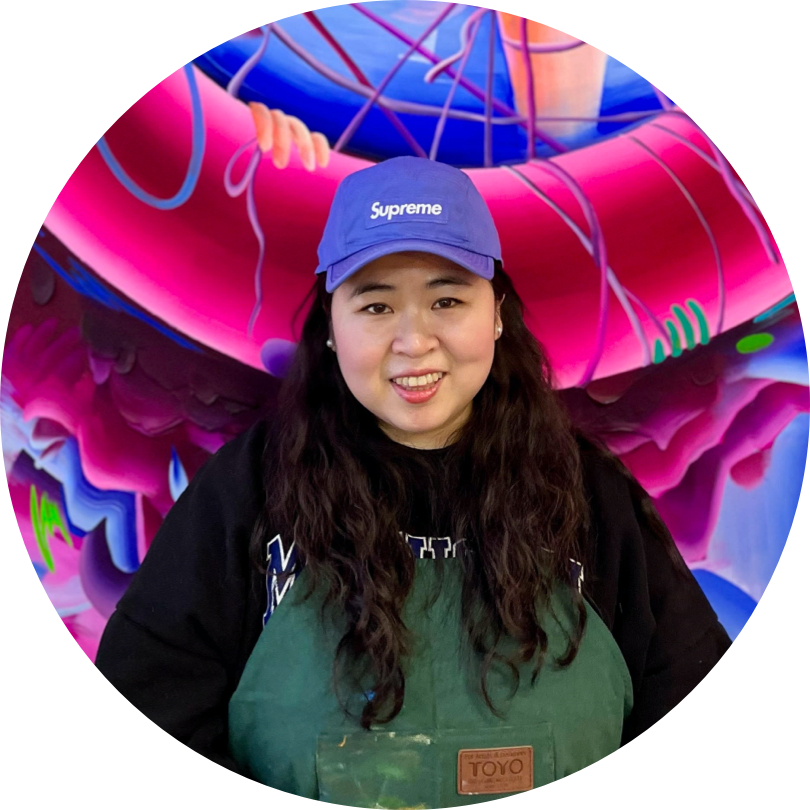 THAT: Tell us about your practice.
HC: I explore personal and cultural issues regarding the societal conception of body image, gluttony, sexuality, gender, and identity in my work. I have expressed the notion of self-torture through the vehicles of decapitation and castration while making her simultaneously desirous and repulsive. I seek to portray the human form as fatty, meaty, and edible, relating to aggression and vulnerability, albeit from a rather perverse perspective. The monstrosity of the characters in some paintings not only play the role of a metaphor for my own expression of the body itself but also serves the viewers to perceive and unmask absurdity in our everyday life.

Narrative devices in my paintings, such as a twisted woman form with her breast hanging over her shoulder, convey both humor and an intense level of seriousness to the viewers. In addition, by twisting my personal pain into a comedic, and creating an illusion of a celebratory look in my work, I often put myself at risk for ridicule because I want to preserve a perspective that embodies both humor and tragedy.

THAT: Talk to us about what it was like putting together your first solo - what was the process like for you? Anything that surprised you by putting this body of work together?
HC: It was quite a phenomenal experience to see how responsive between paintings were when I was creating the work. As I was painting “Tuna Flight at Chemistry Room (feat. Jiwoo)”, I was surprised that the oil paint wasn’t saturated enough to blend the clouds, compared to the paint that I use. I realized how vibrant the color of my paint is. I also tried to make one painting respond to another painting’s color theme.  When I look at Pierre Bonnard's painting, we all often think of how our eyes can move around the colors. Because my paintings also have those multiple changes over one part of painting through colors, I wanted to broaden this perspective to have paintings reflect the colors from each other.

THAT: The materiality of your paintings is one of the many things that feels uniquely you - what was your journey like getting to this stage? Were there any experiments that failed?
HC: I was always experimental with materials from a young age and enjoy avoiding the traditional way to use materials. When I was at college, I started making sculptural and abstract figure paintings that were made of rubber clay. On the other hand, I made these hyperrealistic paintings that were related to the theme of insecurity of body image, indulgence, and gluttony. I wanted to transform these into more of a painting form that can hold more specific narratives. When I was heavily using only oil paintings, I realized that it doesn’t really work for expressive marks that sculpt the figures and I was auditing Jim Lute’s material class at that time during grad school(I was only auditing because he was my advisor and I like to skip classes but don’t like to be failed.)

When he first, introduced me to egg tempera, I wanted to experiment with the pigment but not with the egg tempera process (too much work). It was the biggest liberation of the way of brushwork compared to when I was using oil because of the fluidity of the paint. I think that it worked out perfectly for me because I’m trained in watercolor practice for the most and the longest from a very young age. 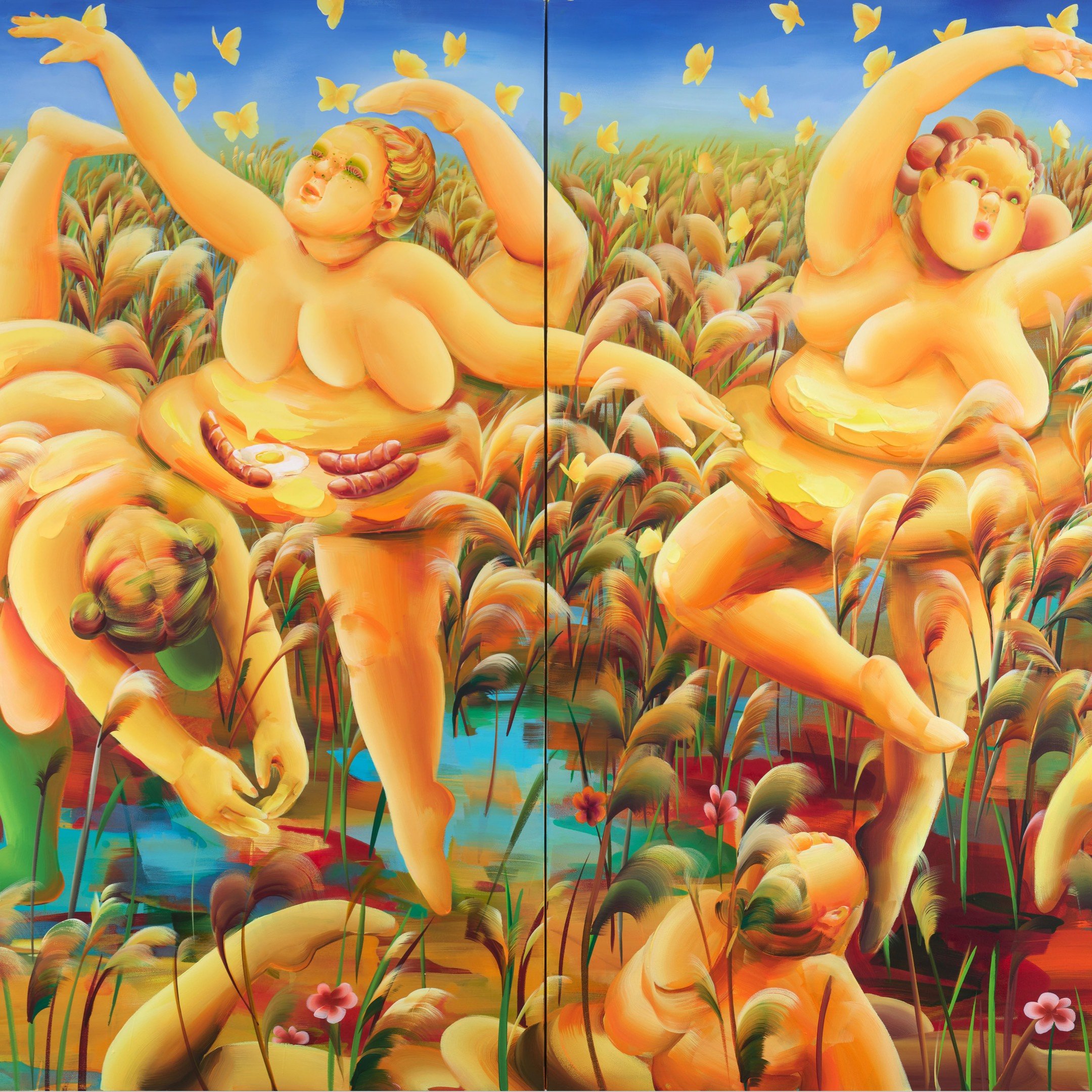 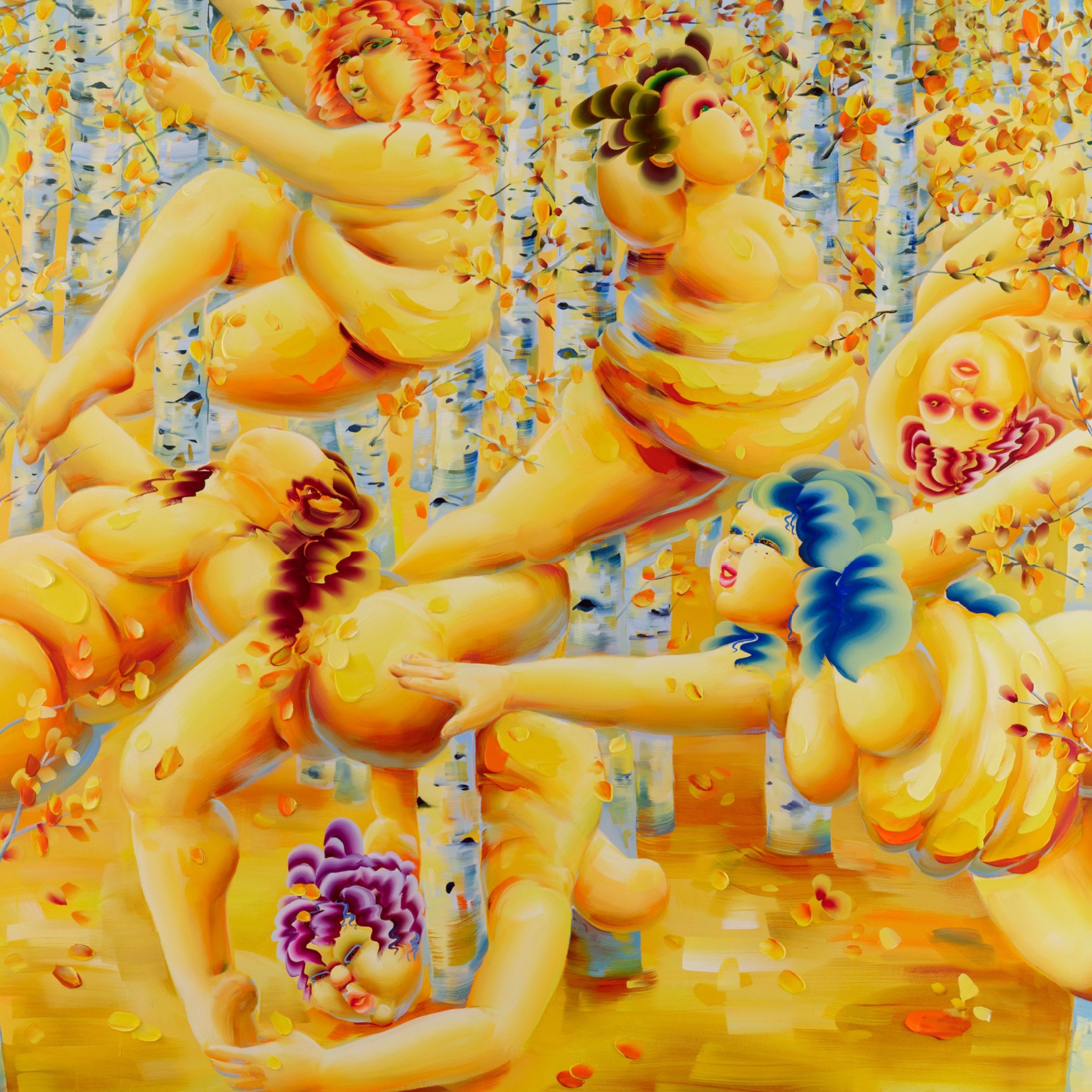 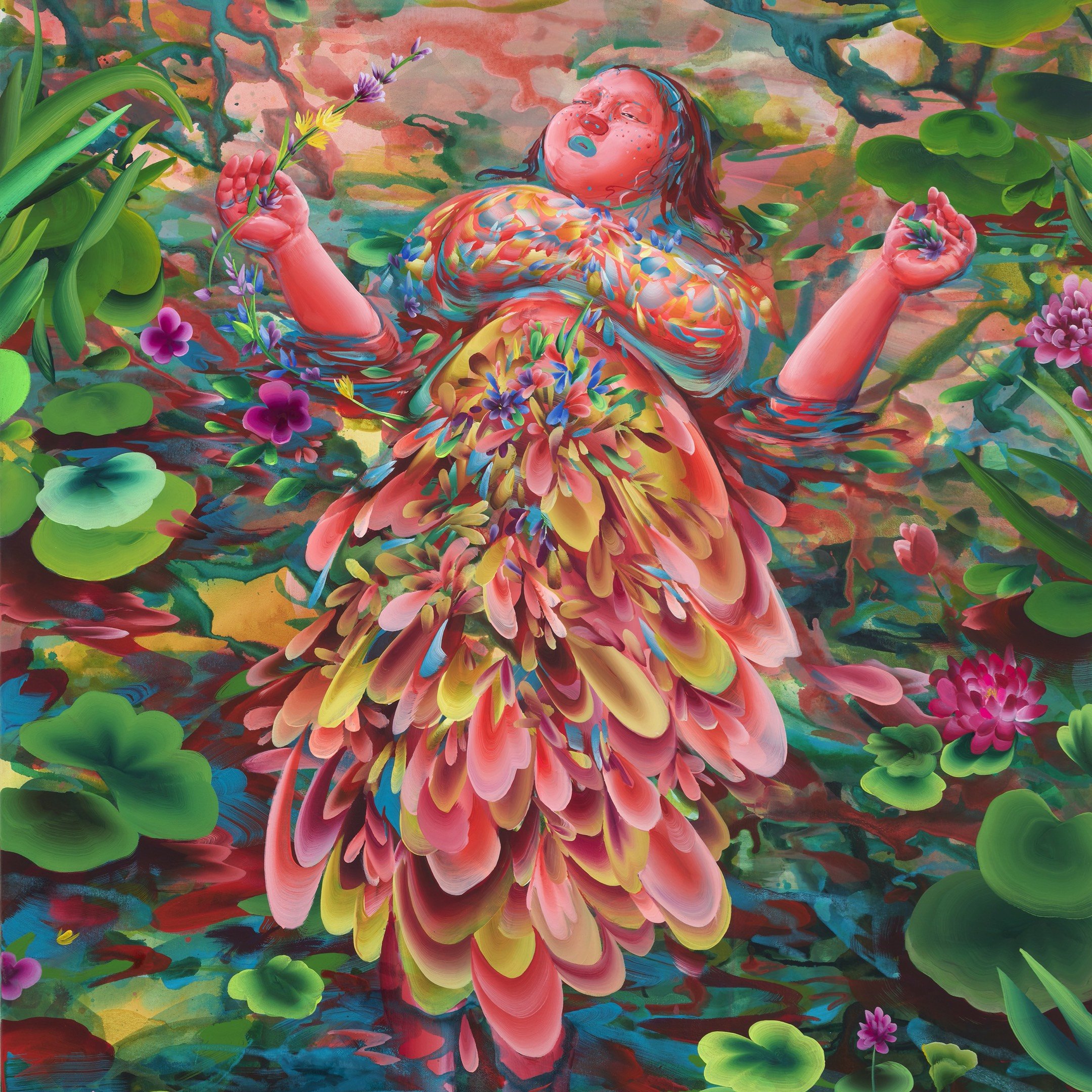 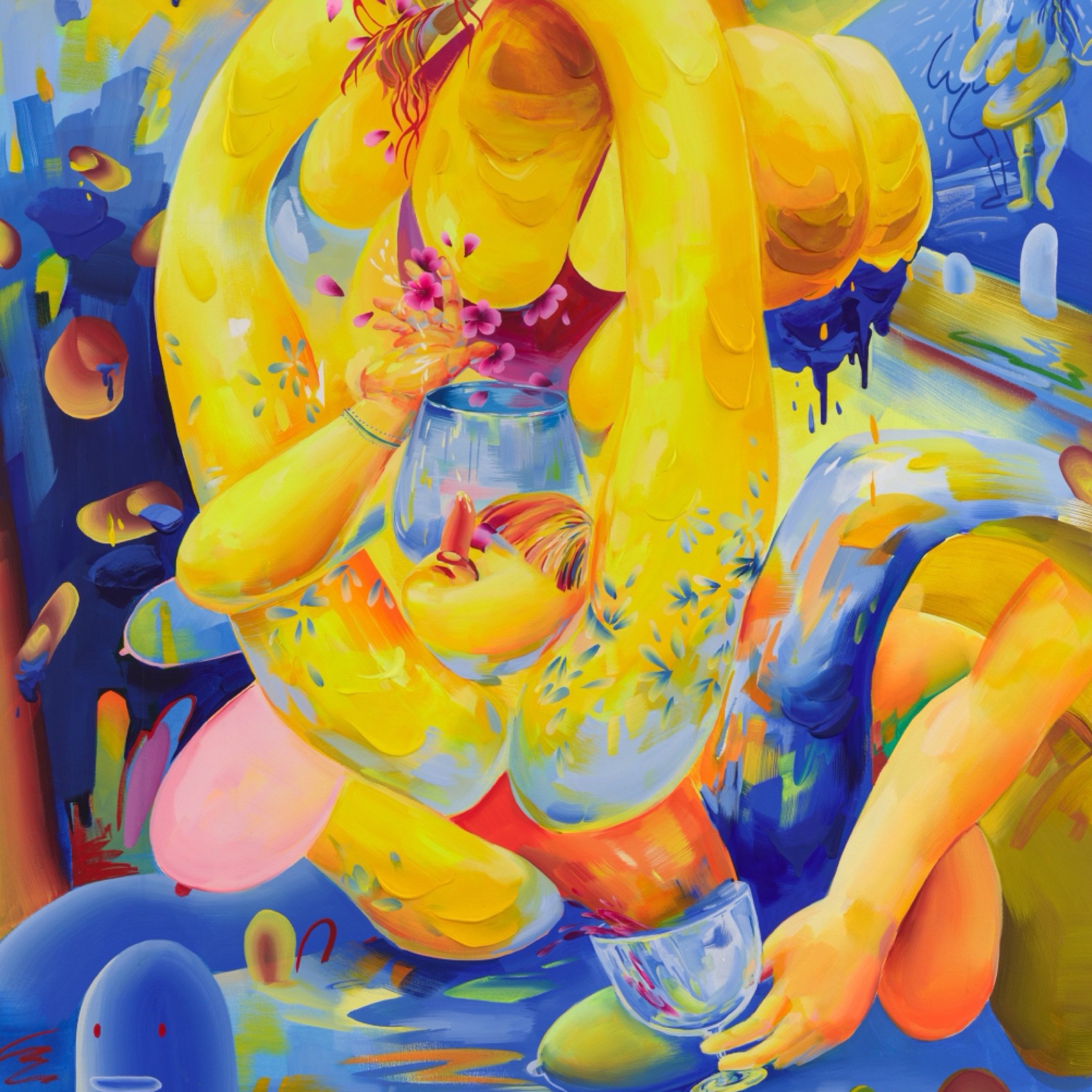 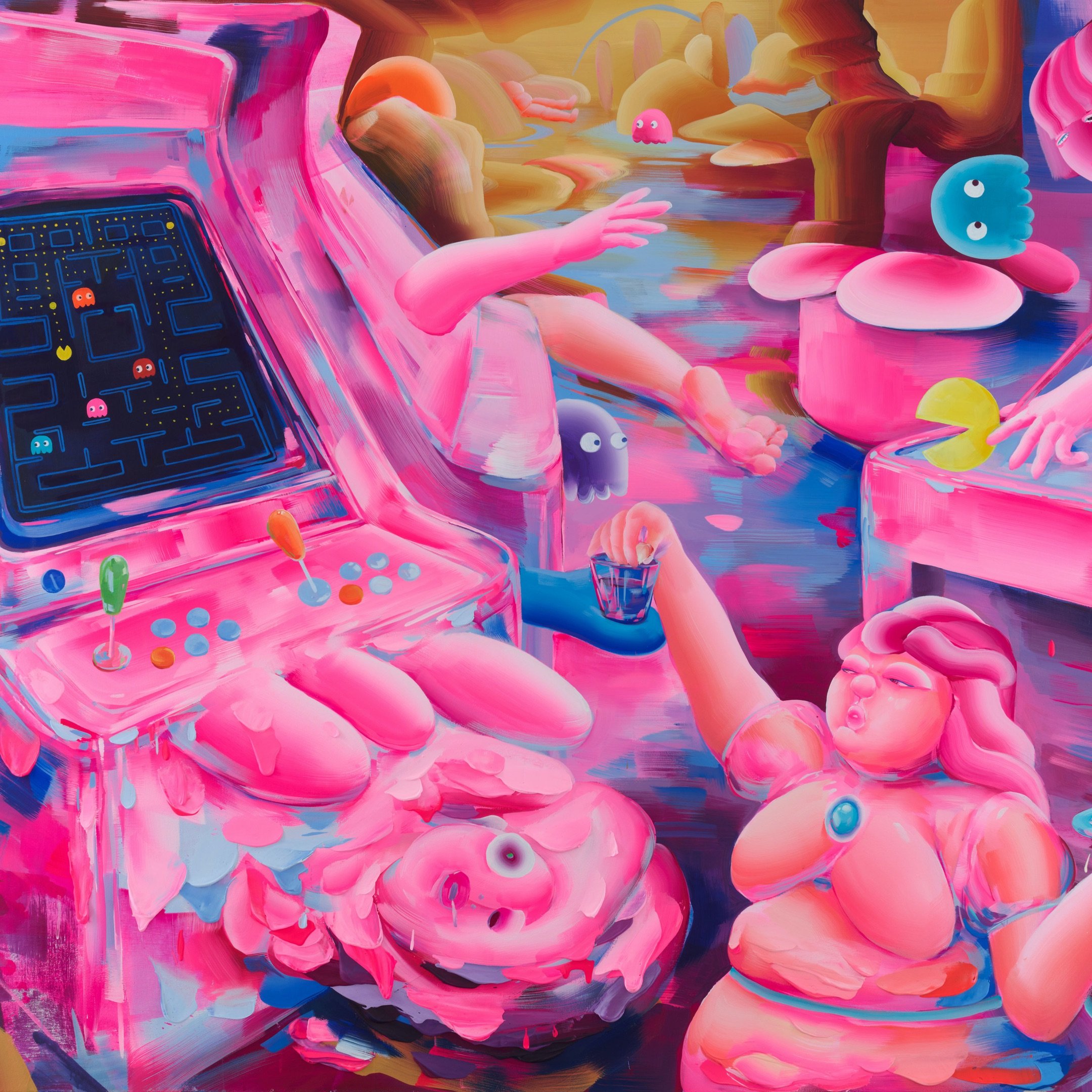 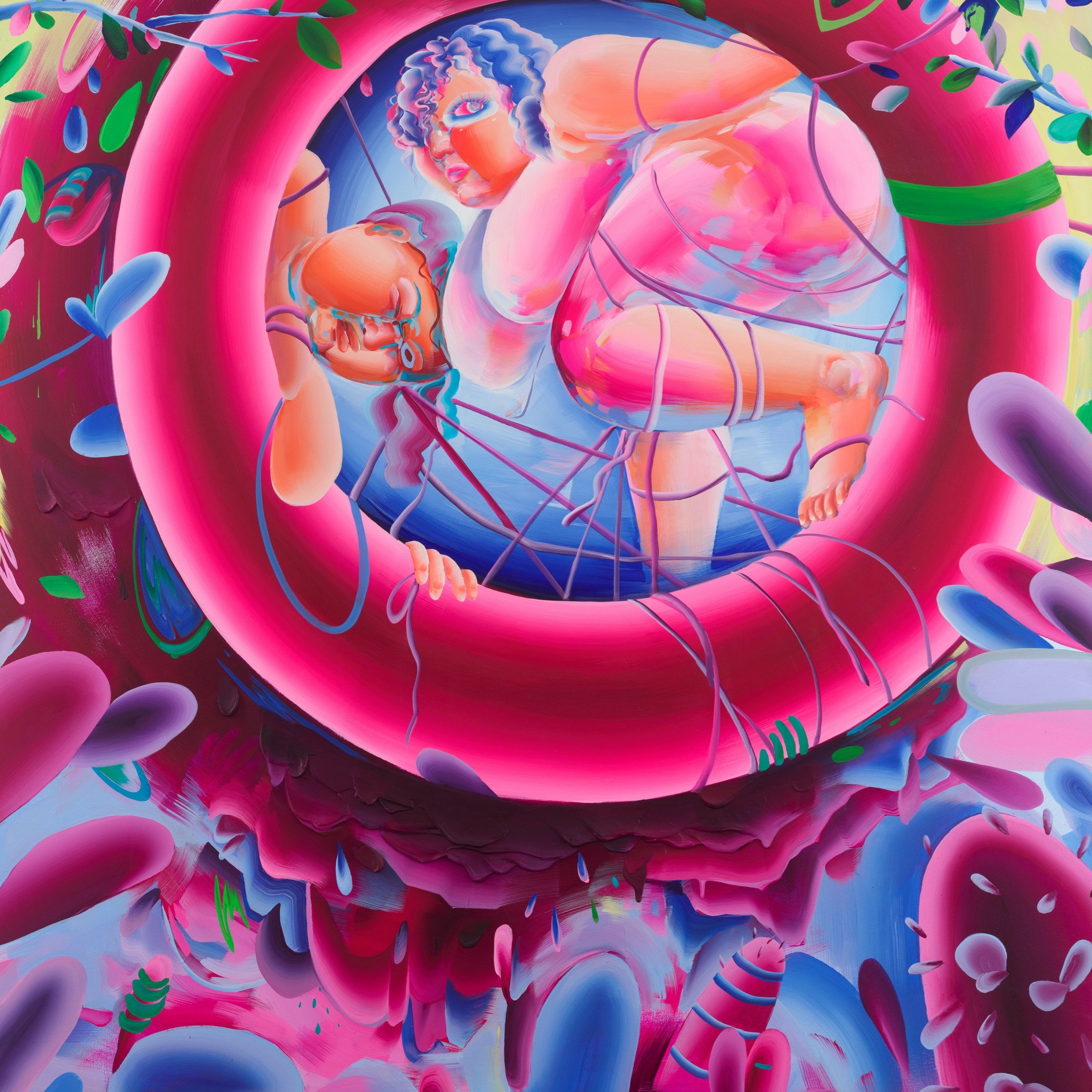 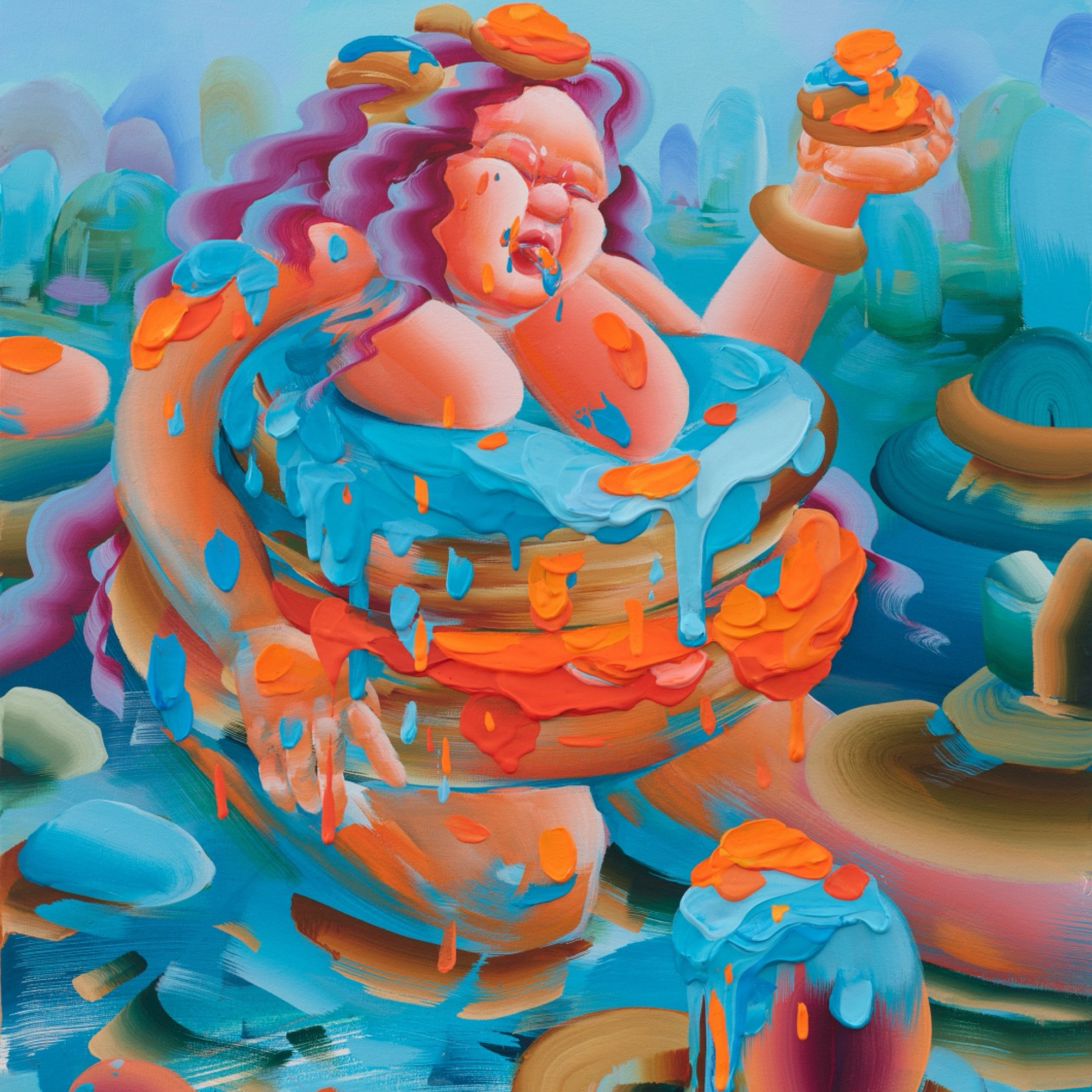 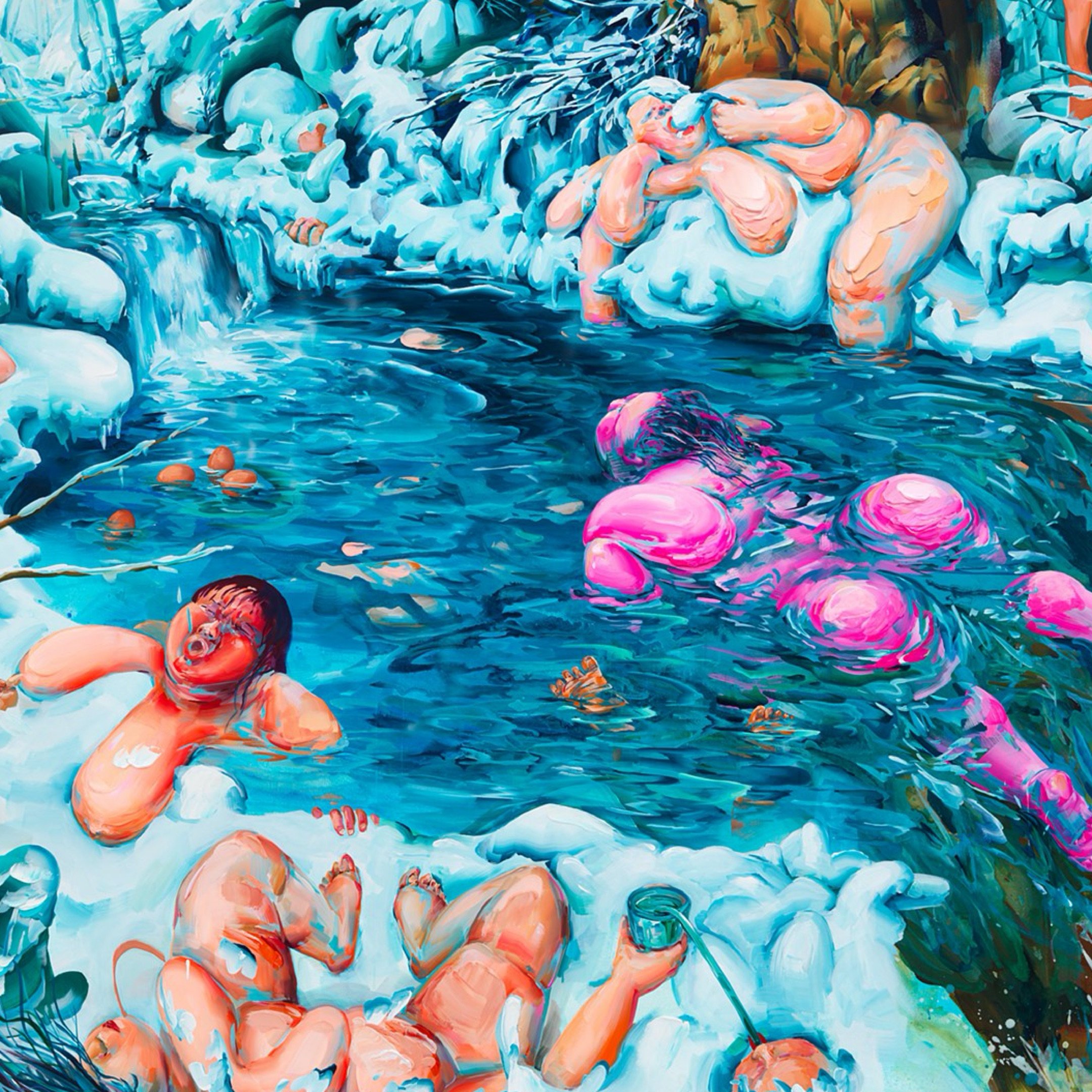 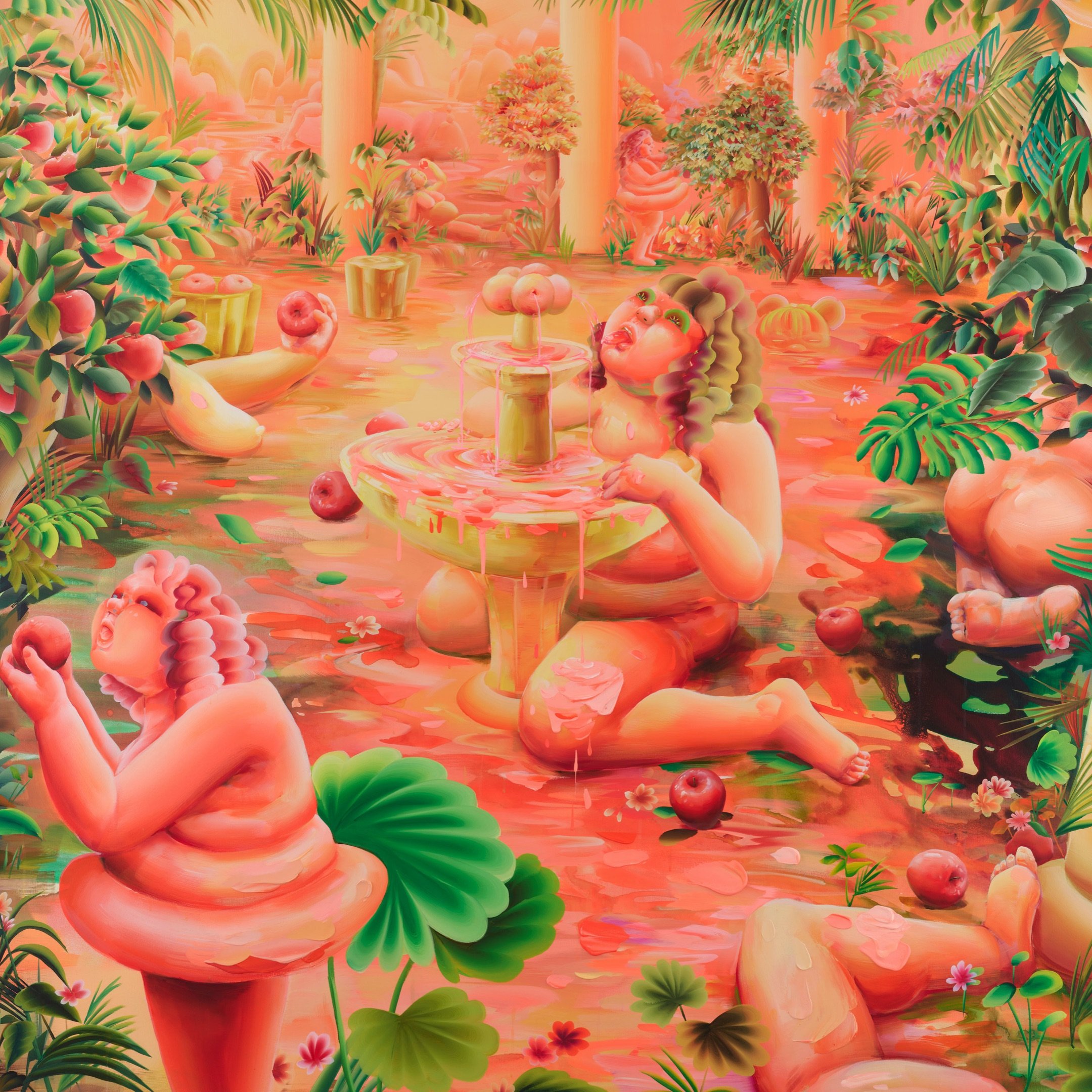 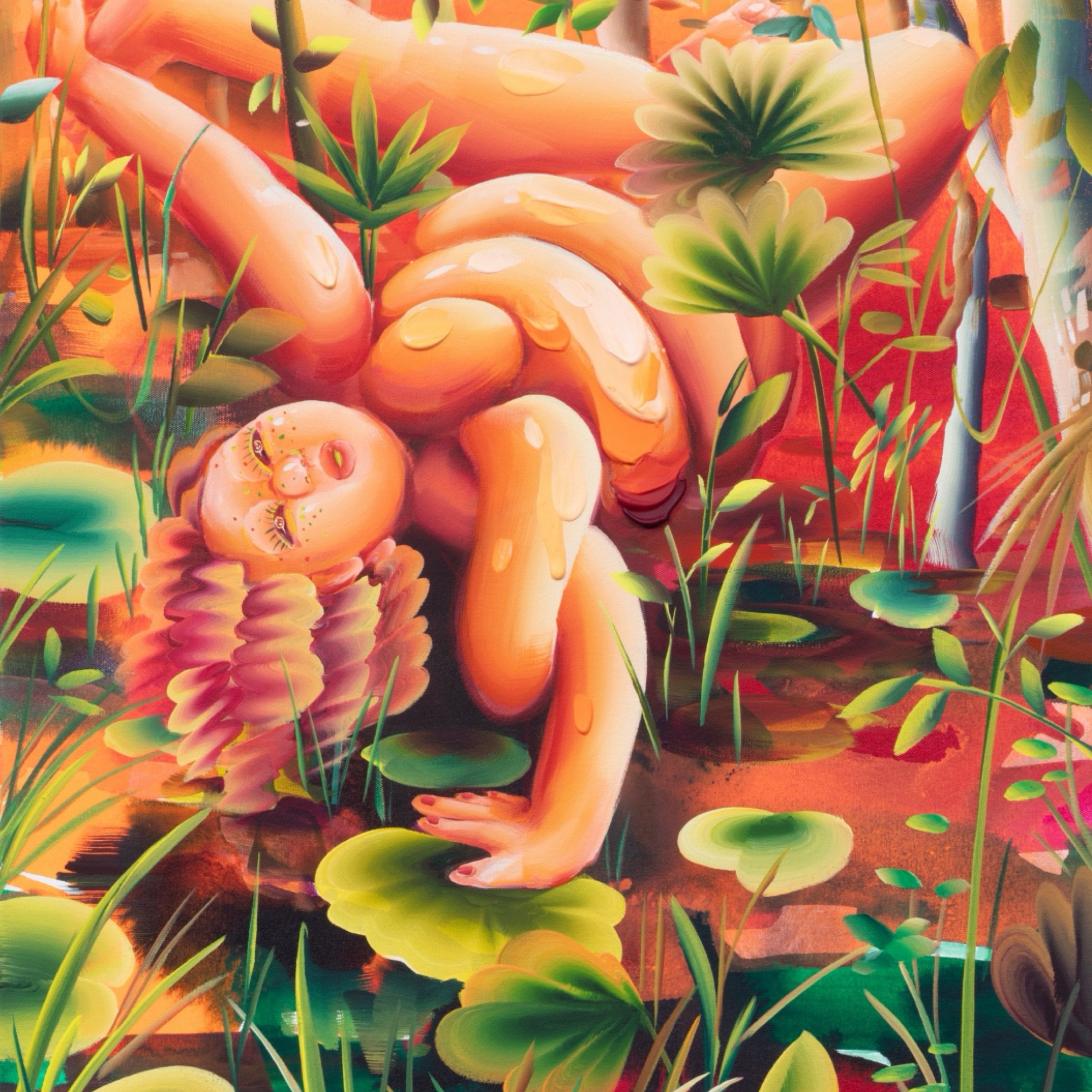 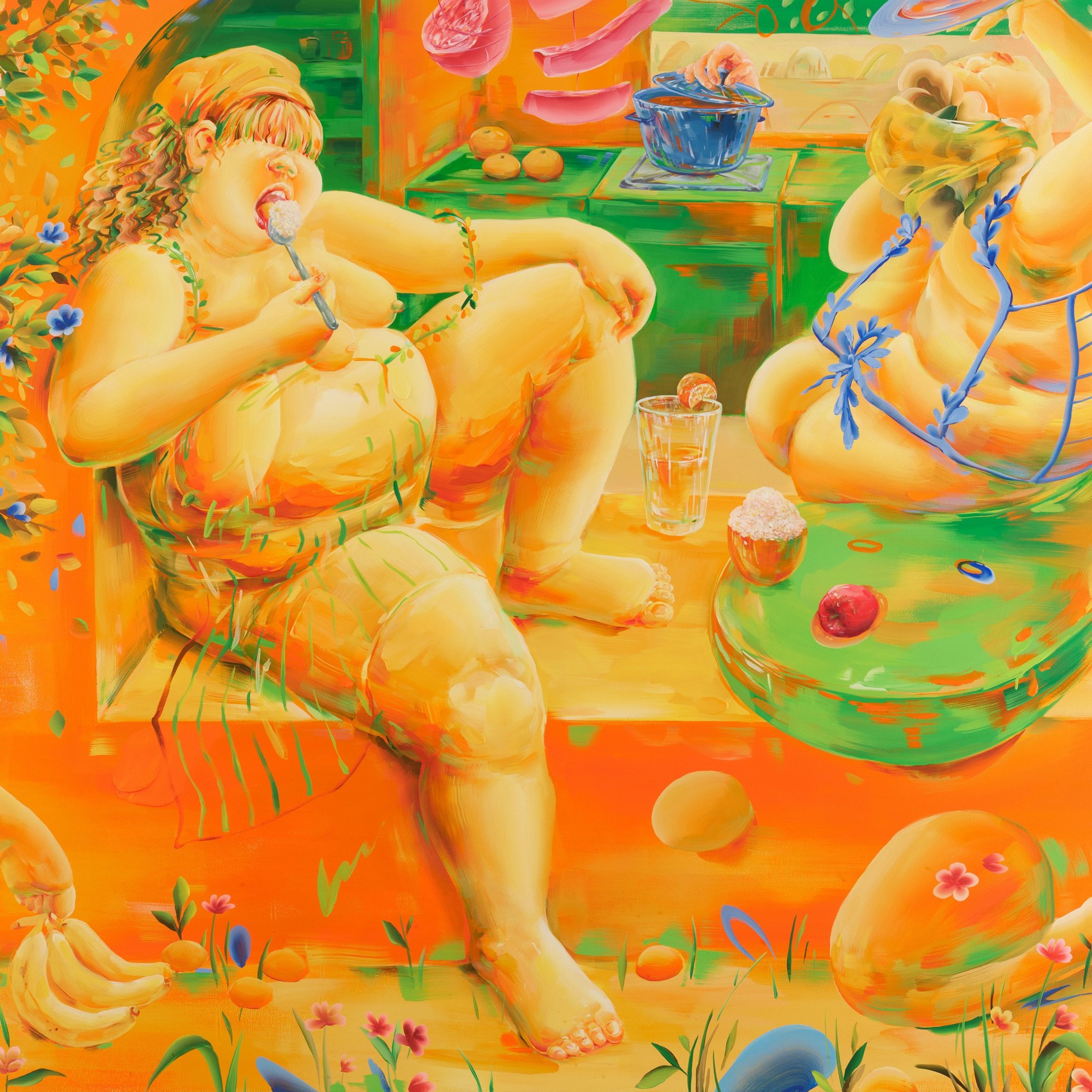 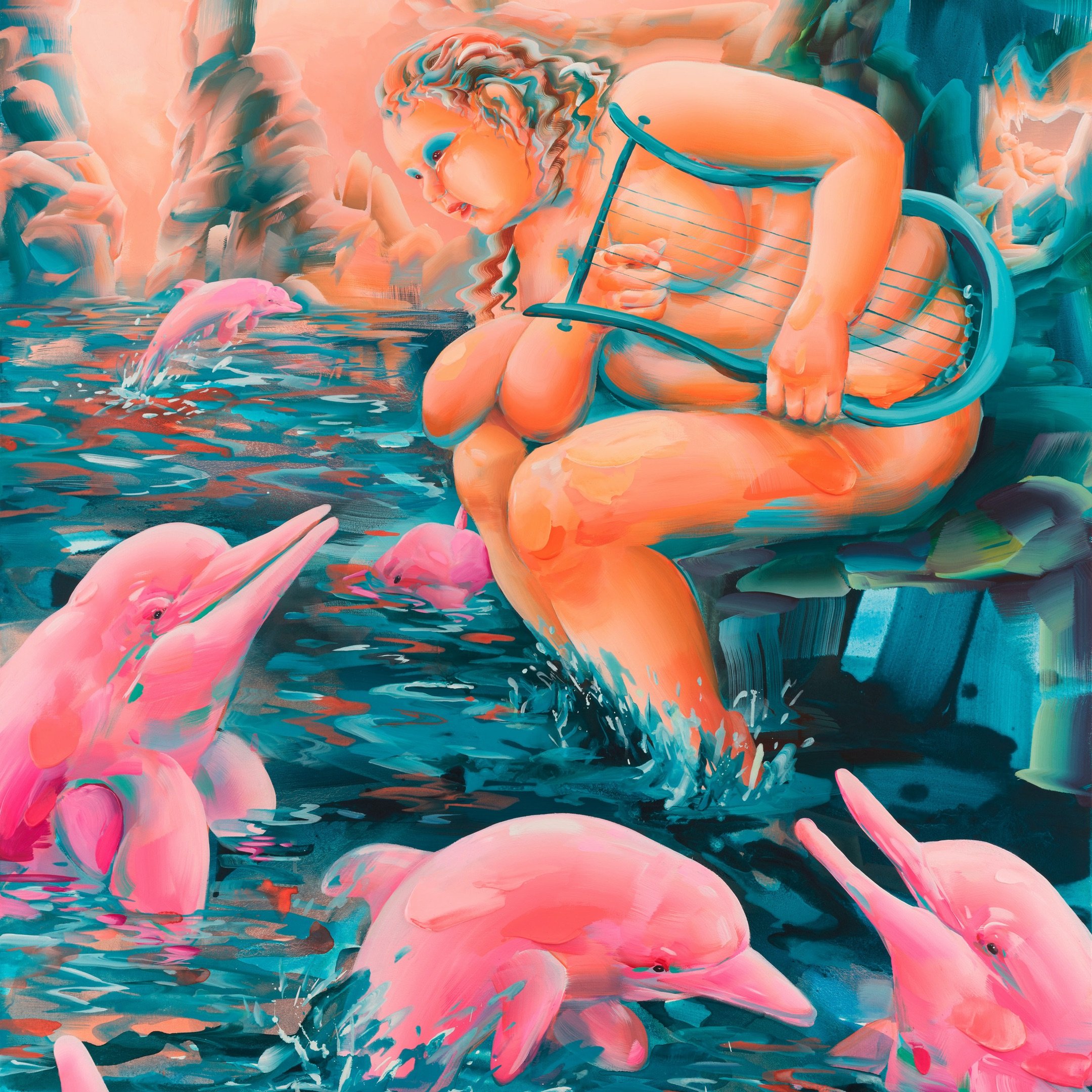 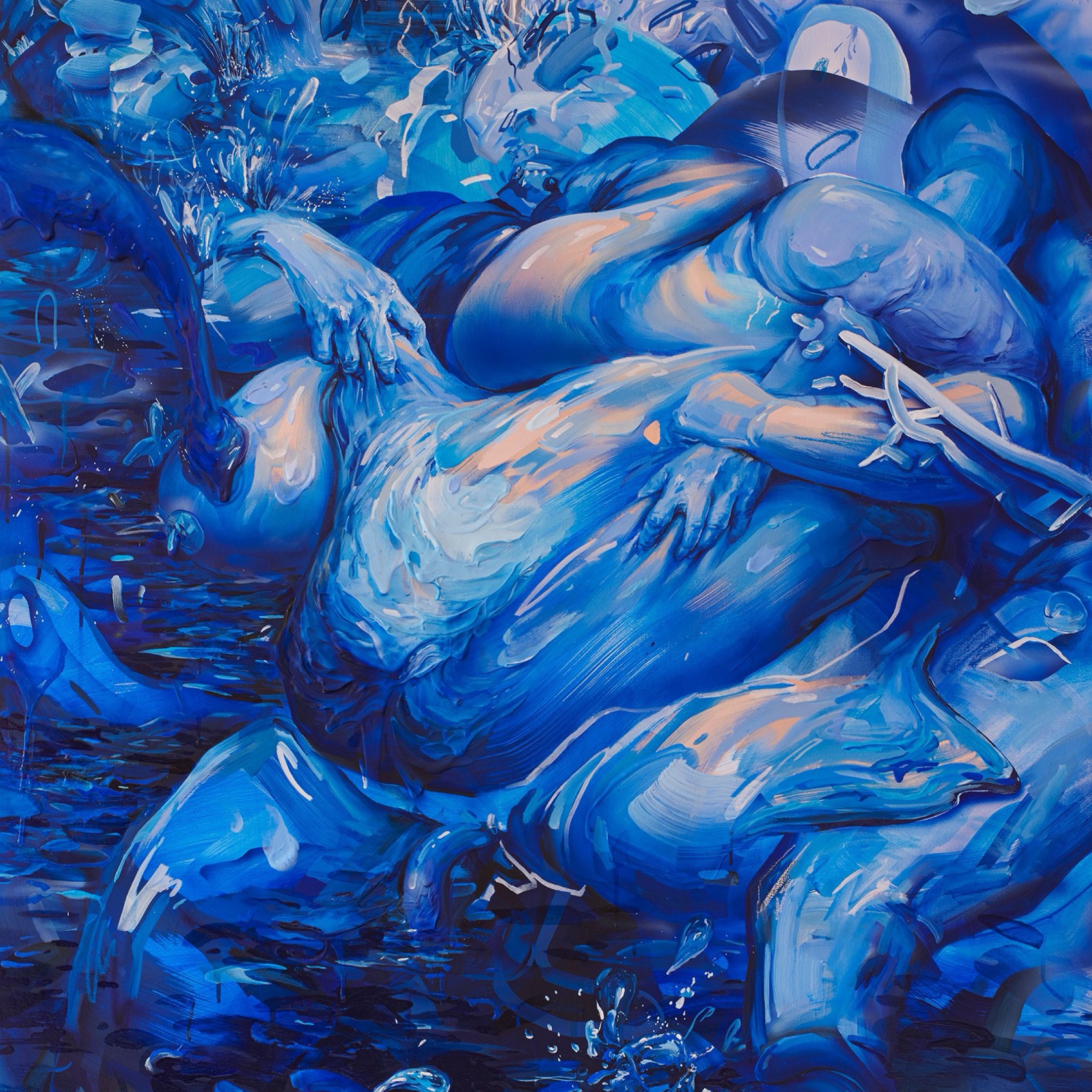 THAT: Your use of color always packs the most delightful and beautiful punch. What was your approach toward your color palette in this body of work?
HC: I frequently transform my personal anxieties and embarrassments into fantasies of the indulgent, excessive, and perverse, aided compositionally, by competing marks, strokes, and images. The emotions in the context of my paintings ignite my irreverent artistic practice. The urgency from my experiences often appears in vibrant colors that act as a primal scream, originating and inciting my need to create. For example, I use slightly darker marks to push fresh figures into the background then use a color combination of complementary color-like which makes the visual effect becomes extremely disharmonic. I wanted to have the colors reflected from one to another works so that as you move along the paintings, you keep seeing some hint of colors from different paintings. I think that freaky elements and toxic colors are very essential to reinforce psychological complexity in my work and I wanted to maximize that in this body of work for the show.

THAT: Looking at your earlier works, your approach to figures in the recent body of work has taken quite a change. It's evolving to become much more abstract and surreal. Can you talk a little bit about how you think and approach your figures now?
HC: I wanted to concise the figures this time, unlike earlier works with abstracted figures. I wanted to create these new characters that portray more likely fairies or witches. The reason why I wanted to create characters instead of making the figures a form or unrecognizable is because I wanted to complicate the narrative within the relationship between the figure and where they are located.

THAT: What has been inspiring you lately?
HC: I often get inspired by situations that are related to my body image or physical limitations.

Lately, I’m inspired by dancers, dance videos, movement, and costumes a lot. It is also deeply connected to me as not being able to dance much for a while after the pandemic. Also, my favorite dance studio is gone which was an easy commute for my schedule. I have been dancing for several years, and not being able to dance for a while brought me more desire to talk about it in my work. I also get inspired by TV shows sometimes when there is an impossible image, it evokes me to create something that I can make more believable.

THAT: What's next for you?
HC: Painting more and start dancing again. I have other shows coming up and want to create works that are evolved from now. 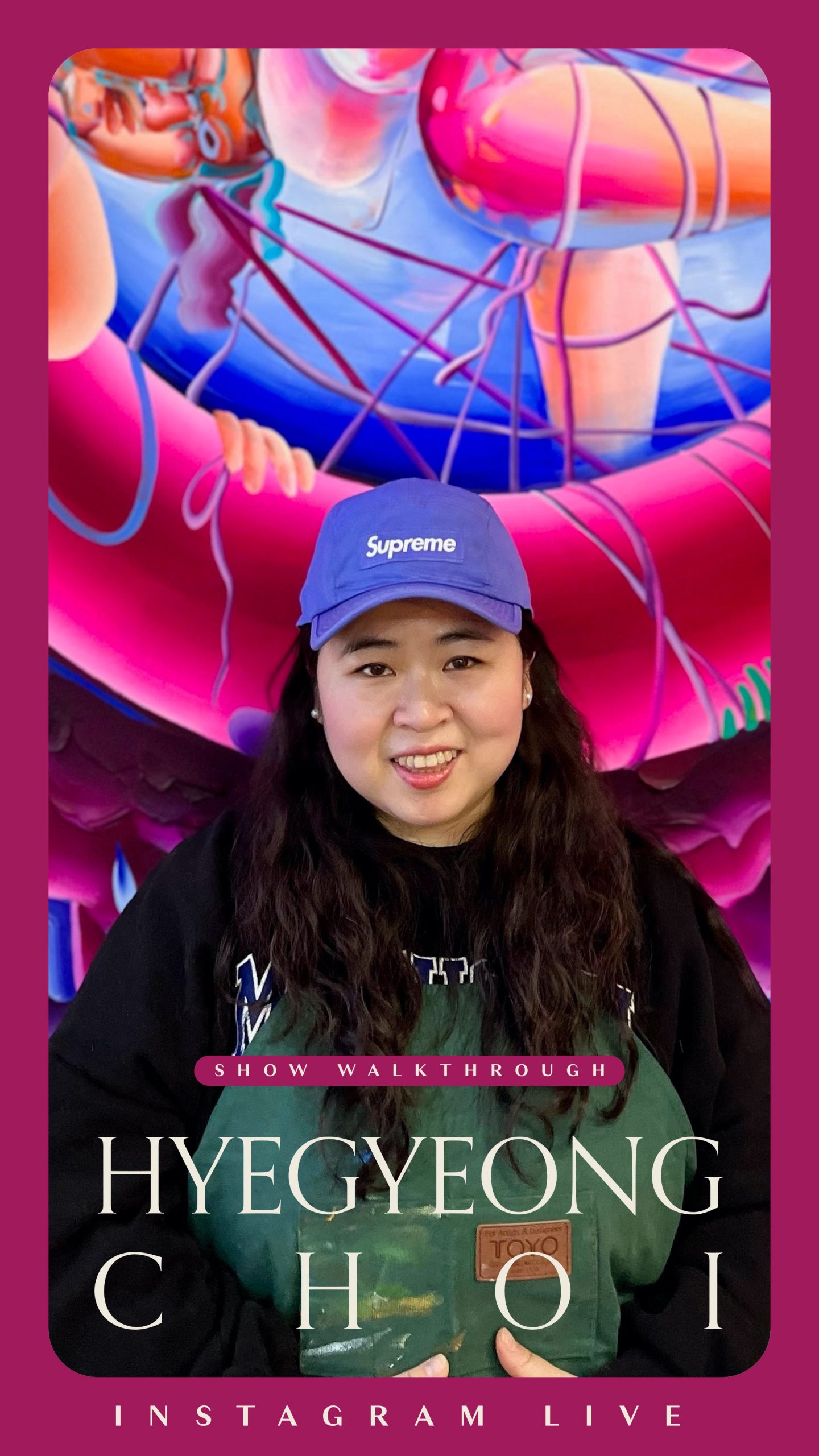