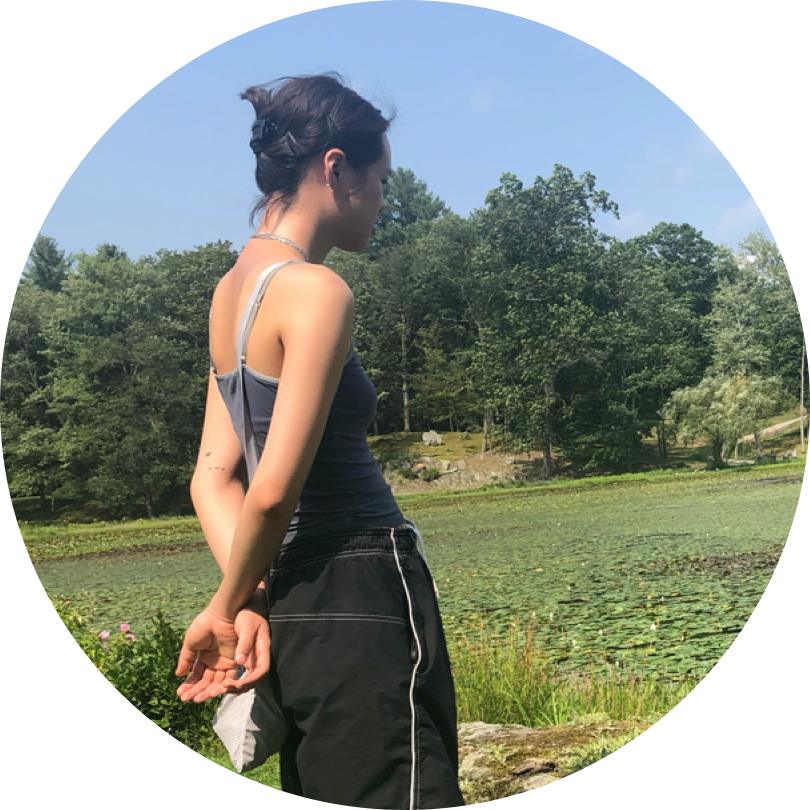 Mimi Park (b. 1996, Seoul, South Korea) is an interdisciplinary artist currently residing in New York. Inspired by interwoven patterns around her, which includes the microscopic world, soft circuitry, play therapy, and beyond – Park continues her world-building. The sensorial play a central role in her work, interested in the ways that neuro-atypical forms of communication can often be misconstrued, something that she has experienced firsthand. Mimi has exhibited her work in Chicago, New York, Seoul, and Berlin.

THAT: Tell us about your practice.
MP: The shape of my practice is in constant fluctuation. I enjoy having my points of connection continuously oscillate like one of those visual data mapping videos. The nodes of thoughts eventually keep expanding. Some of the thinking pods that I have been focusing on are the dichotomy of invasion/protection, circular systems in gardening, the electric current flowing in robot toys’ bodies and my own body, soft circuits, connected learning, and play.

THAT: Your installation for Dawning: dust, seeds, Coplees at Lubov Gallery places viewers in an exciting and strange space of precocity — bouncing back and forth between curiosity and discomfort (for fear of destroying the delicate objects). What do you think/hope is offered in this in-between? Do you see it as a suspension or vacuum?
MP: In the very early stages of coming up with this project, Dawning: dust, seeds, Coplee, I was thinking a lot about both intentional and inevitable interconnectedness. How every single being on Earth holds the responsibility of existing. I’m not saying responsibility in the moral sense, but more like acknowledging their own being and the world within each other, rather than thinking of each of us as discrete objects. In short, responding to each other. I very much enjoy the tension between curiosity and discomfort that the work generates with the audience. I loved observing people tip-toeing not to knock off an object that is made of scrap plexiglass and a baseball. It was the moment of initiation of the relationship between this anthropomorphic object and the person. During those interactions, the quiet, gentle, slow-paced observation with respect beyond species was something I really wanted to put to the forefront when I was imagining the project. These connections aren’t like solid lines that I often imagine to be, but they resemble more like that aerial energy that we subtly feel in the air when two beings start to interact. 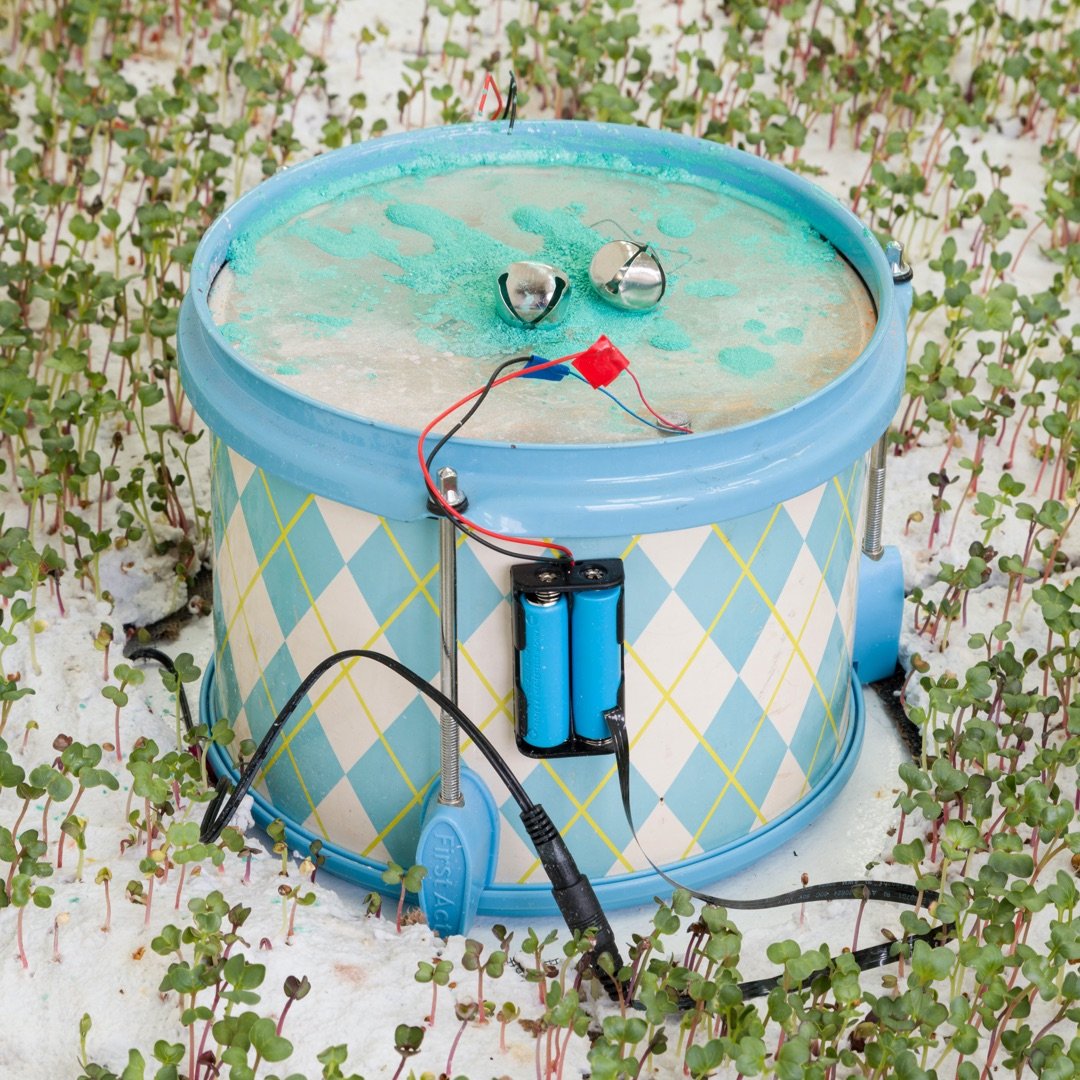 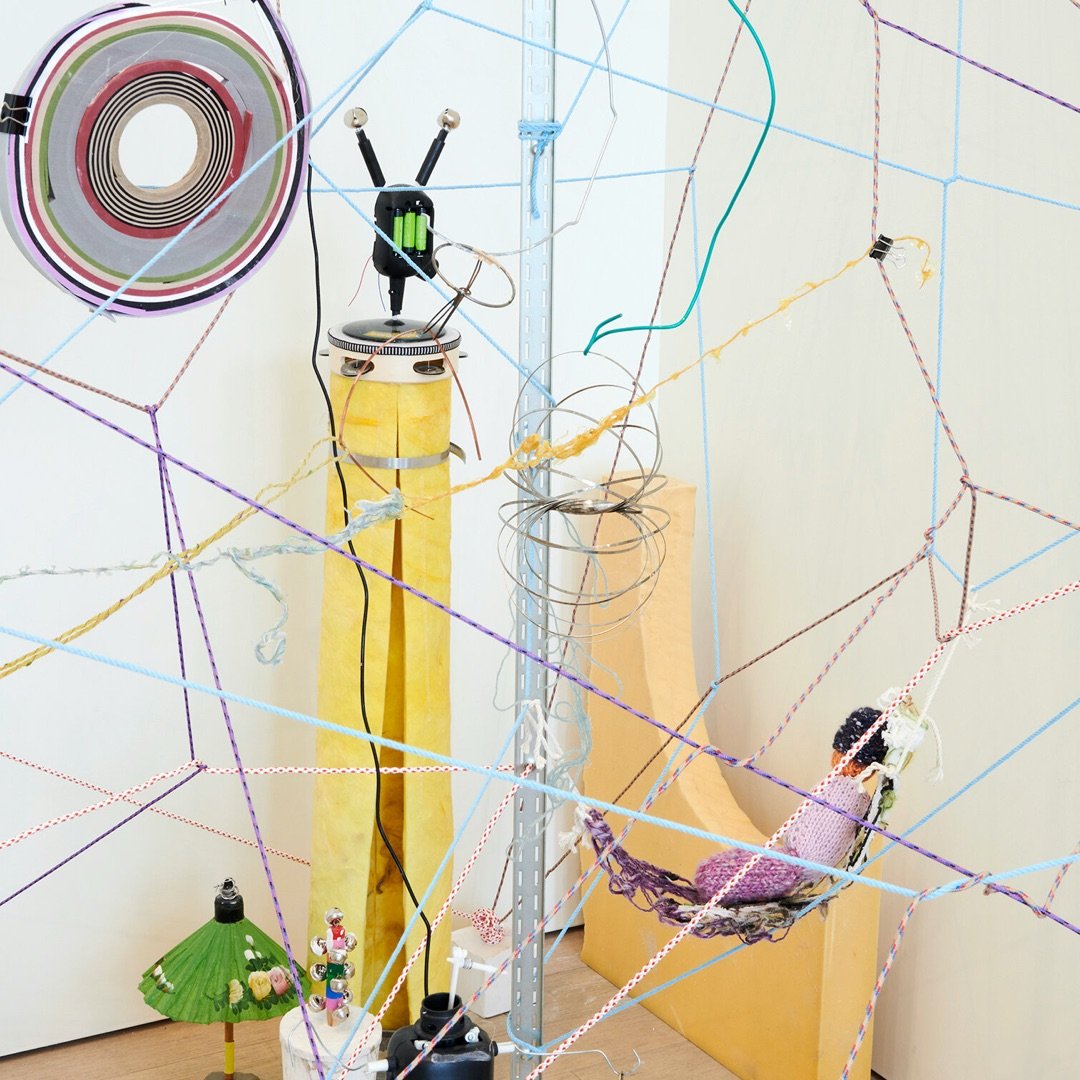 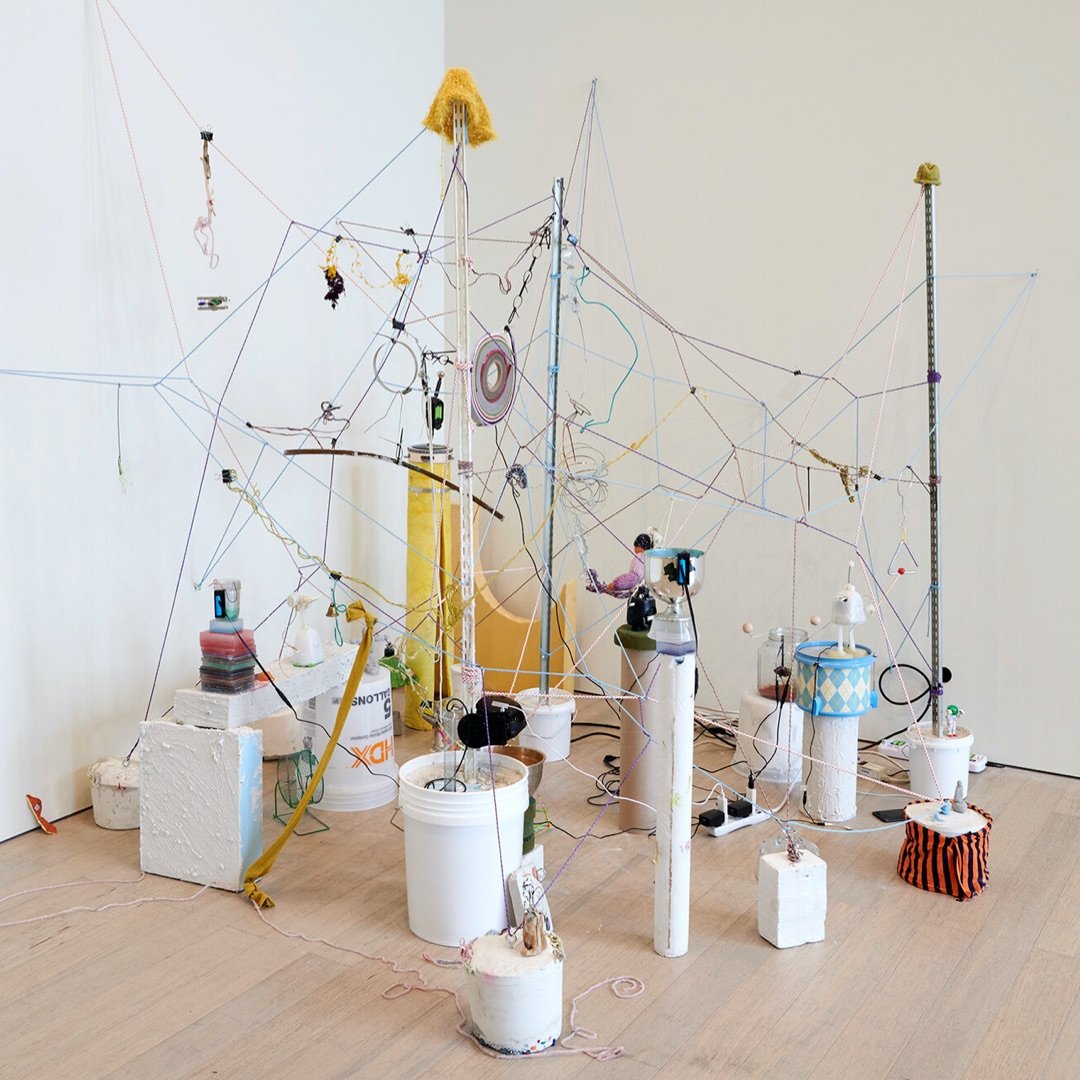 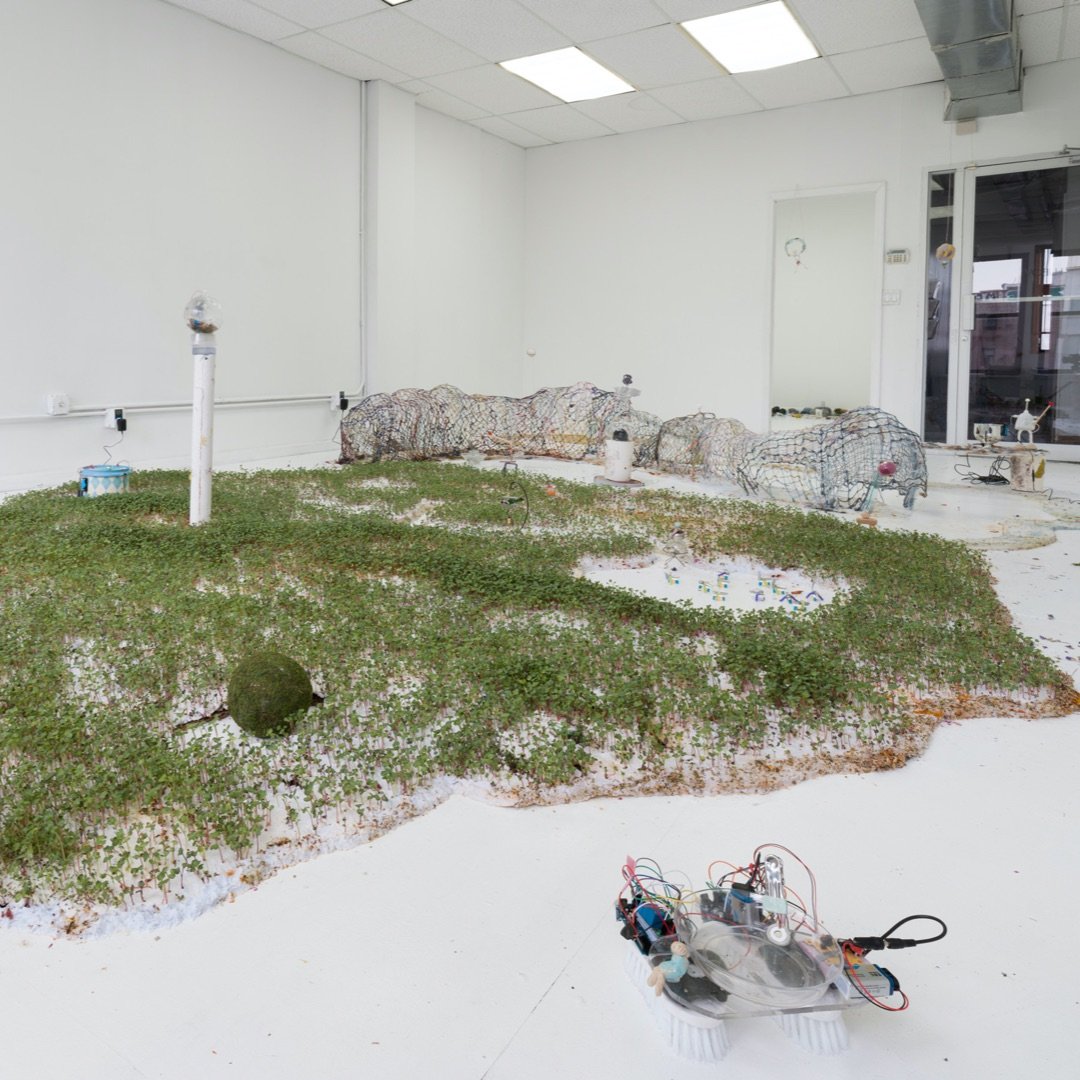 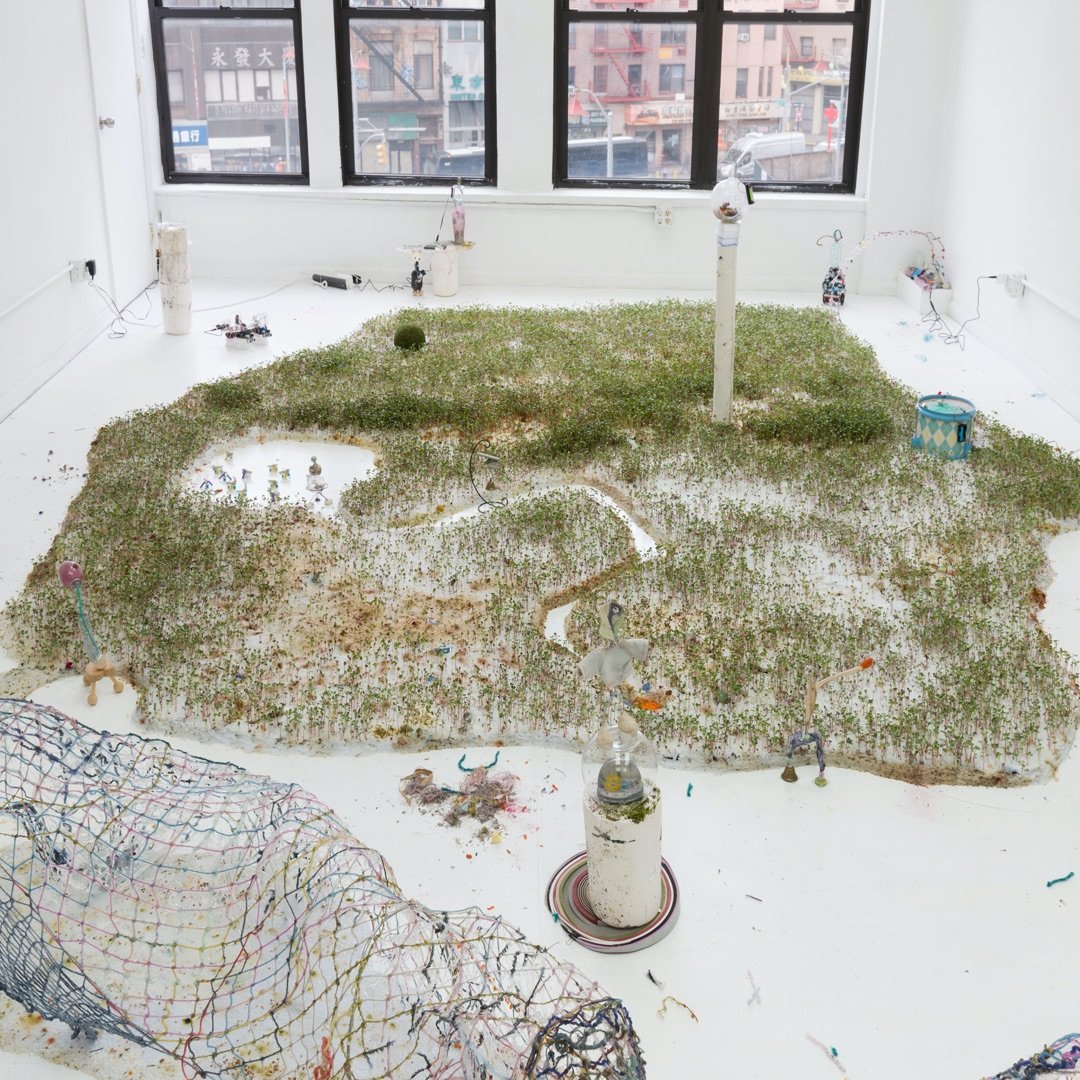 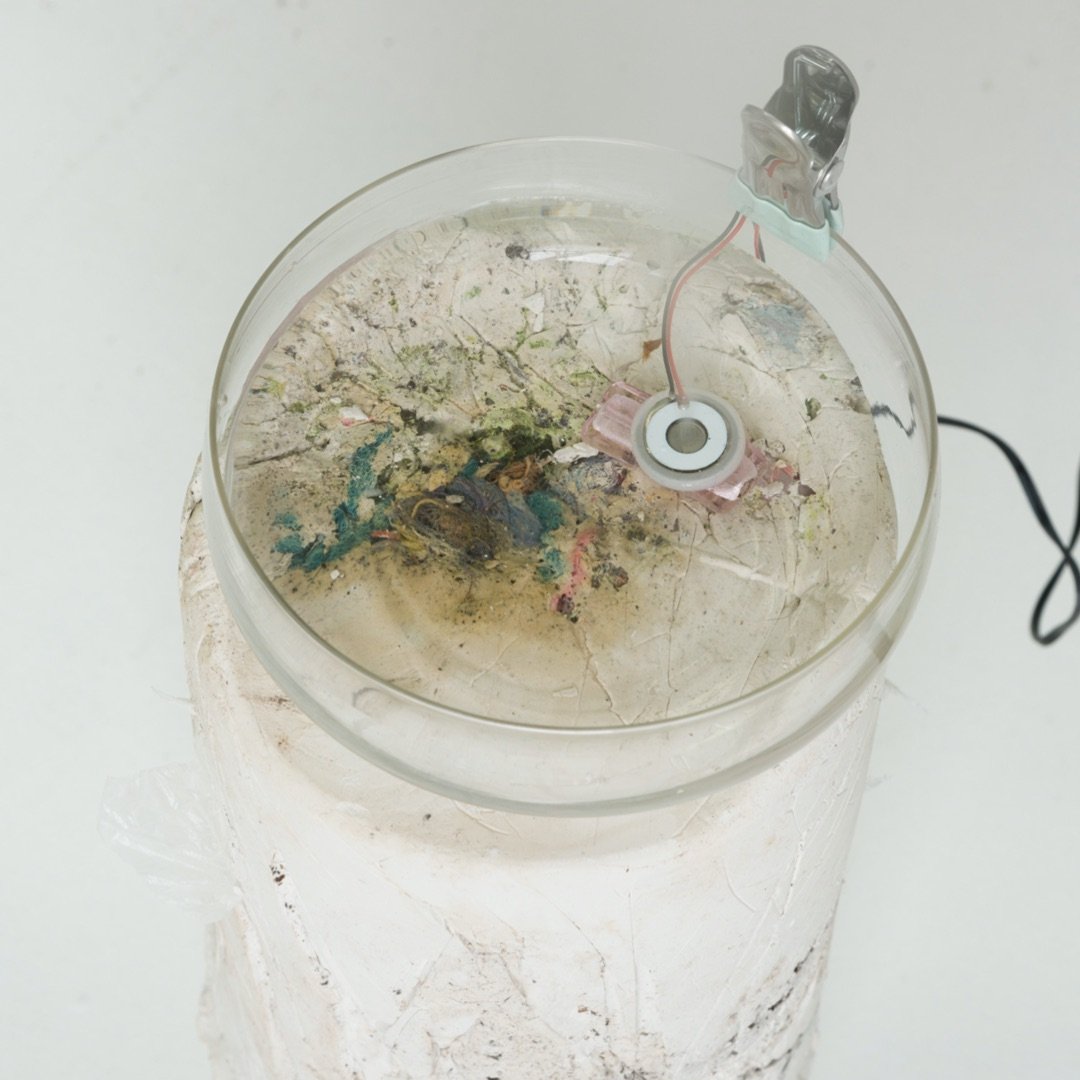 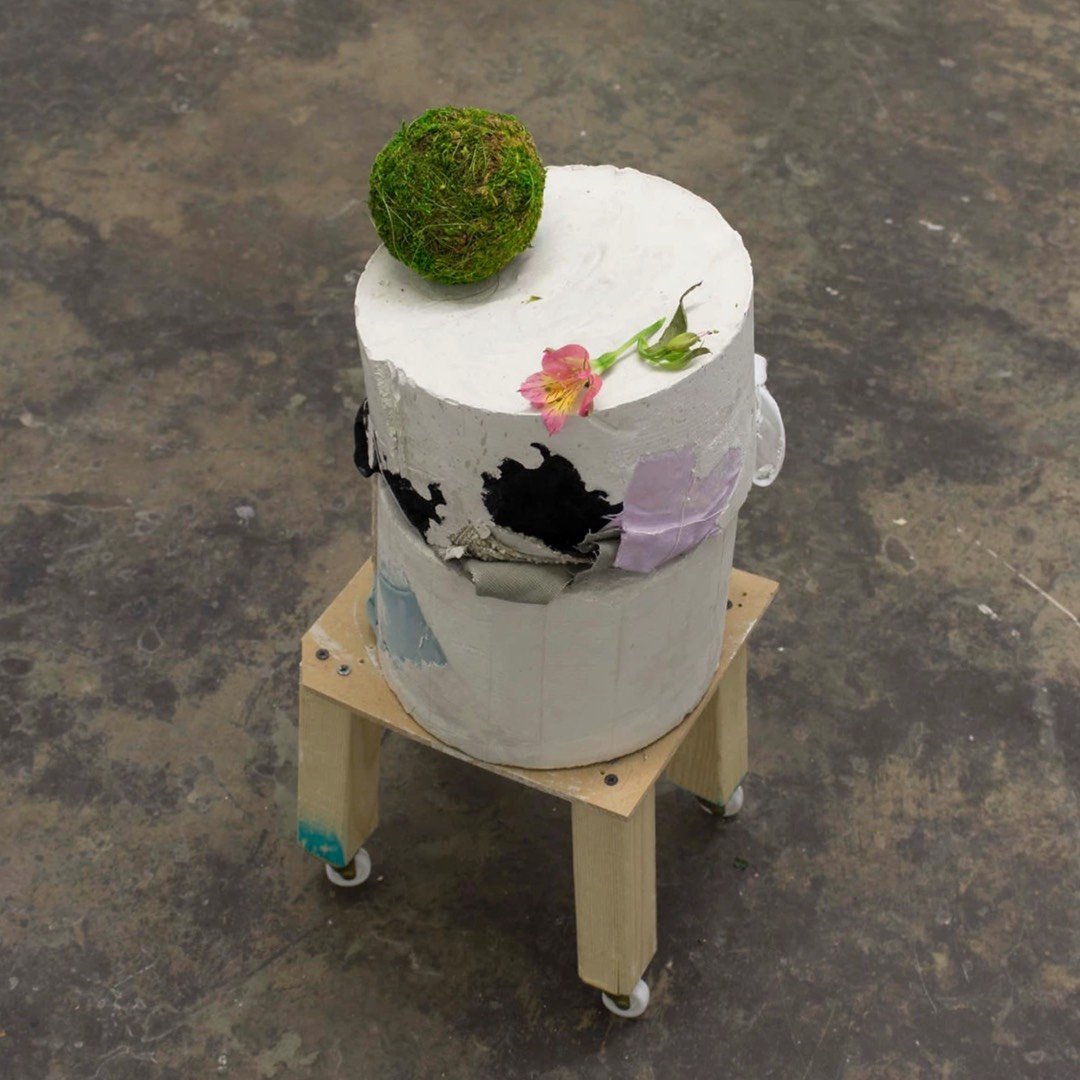 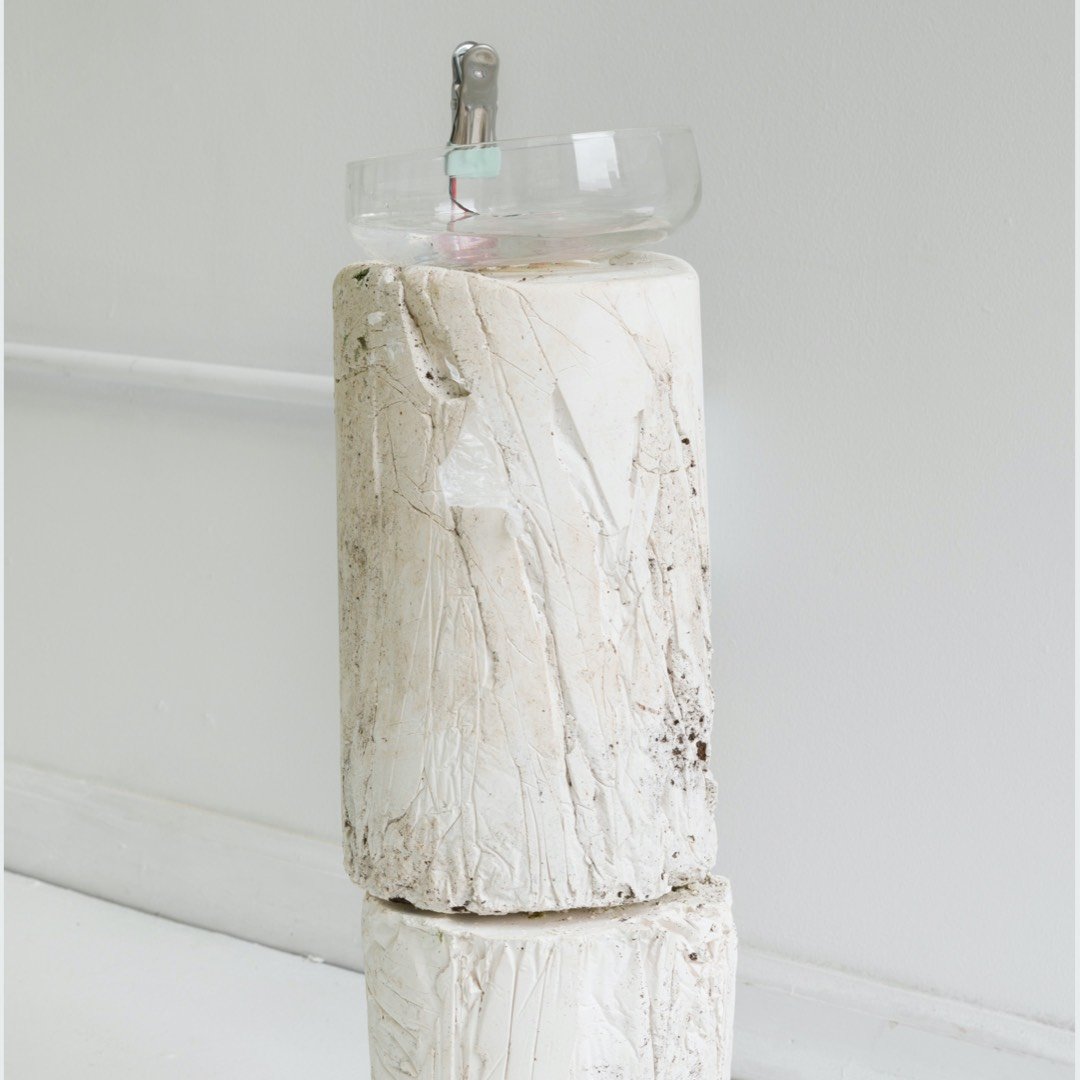 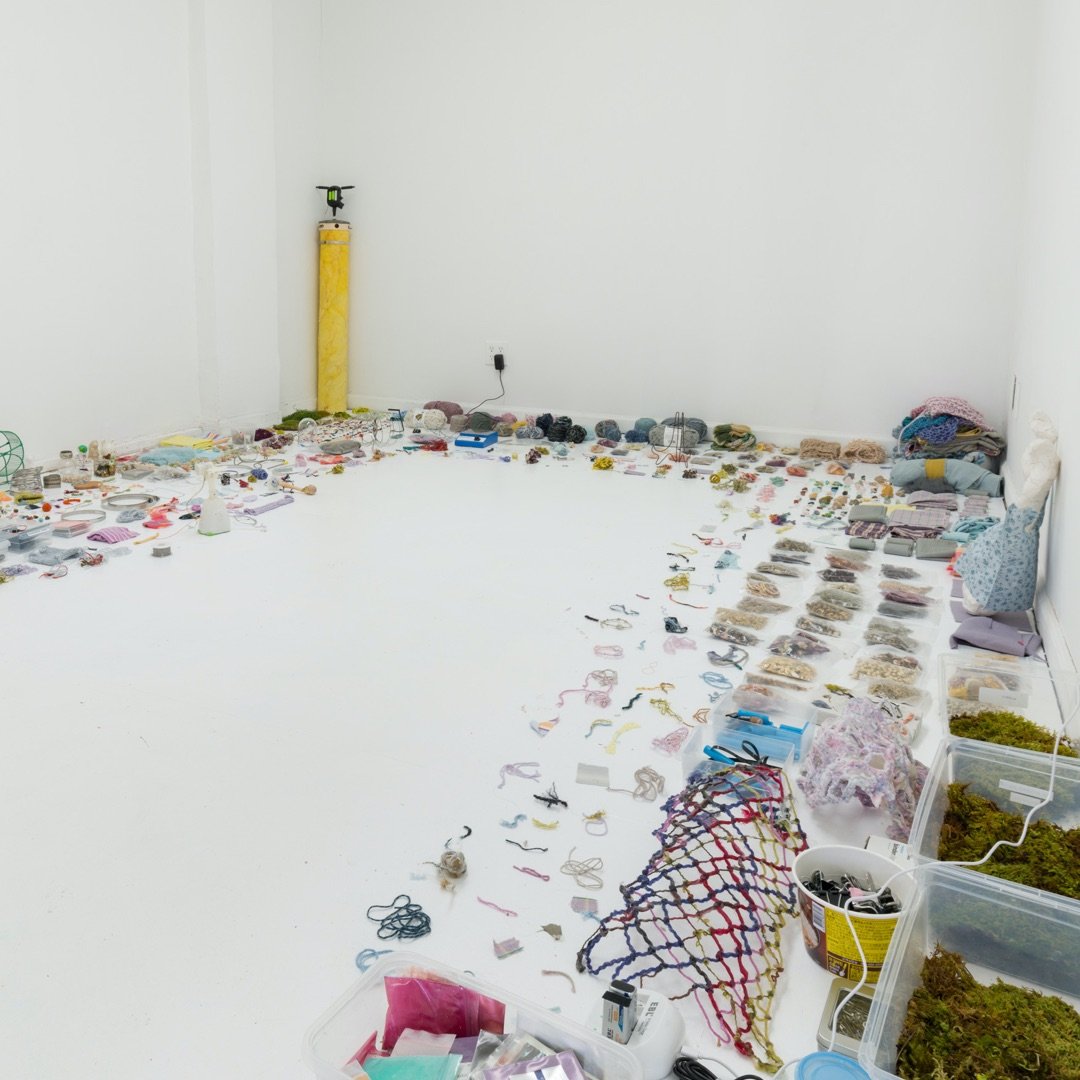 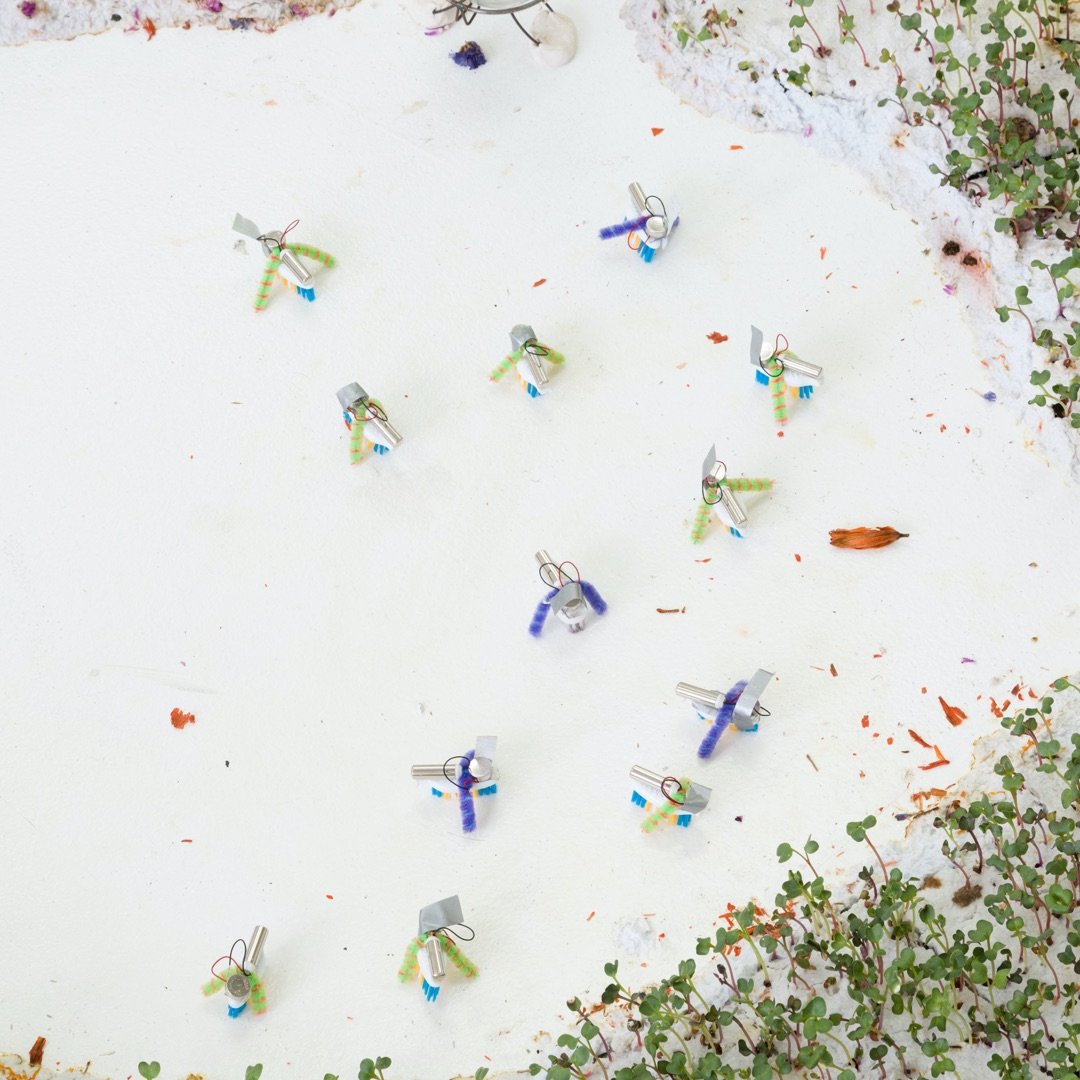 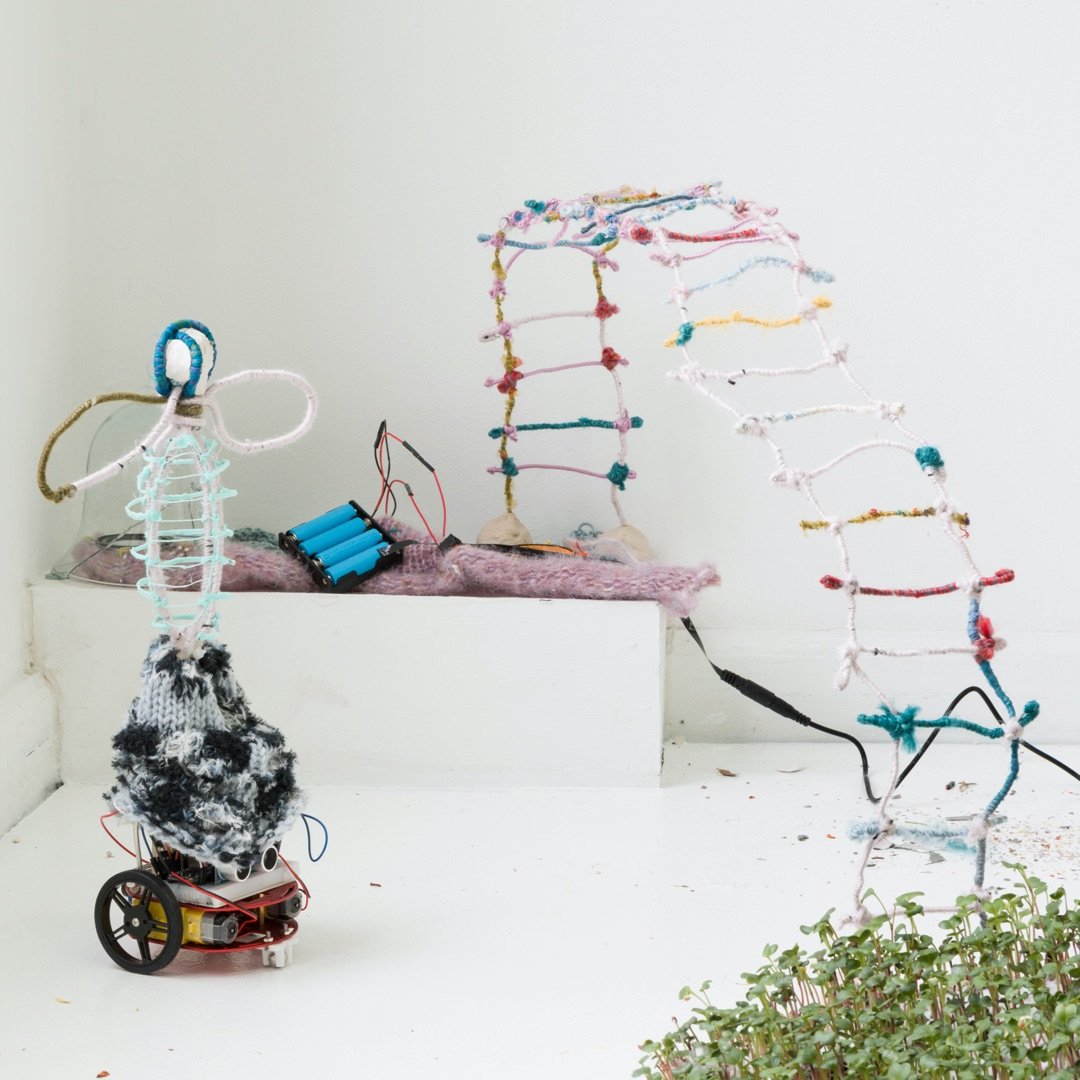 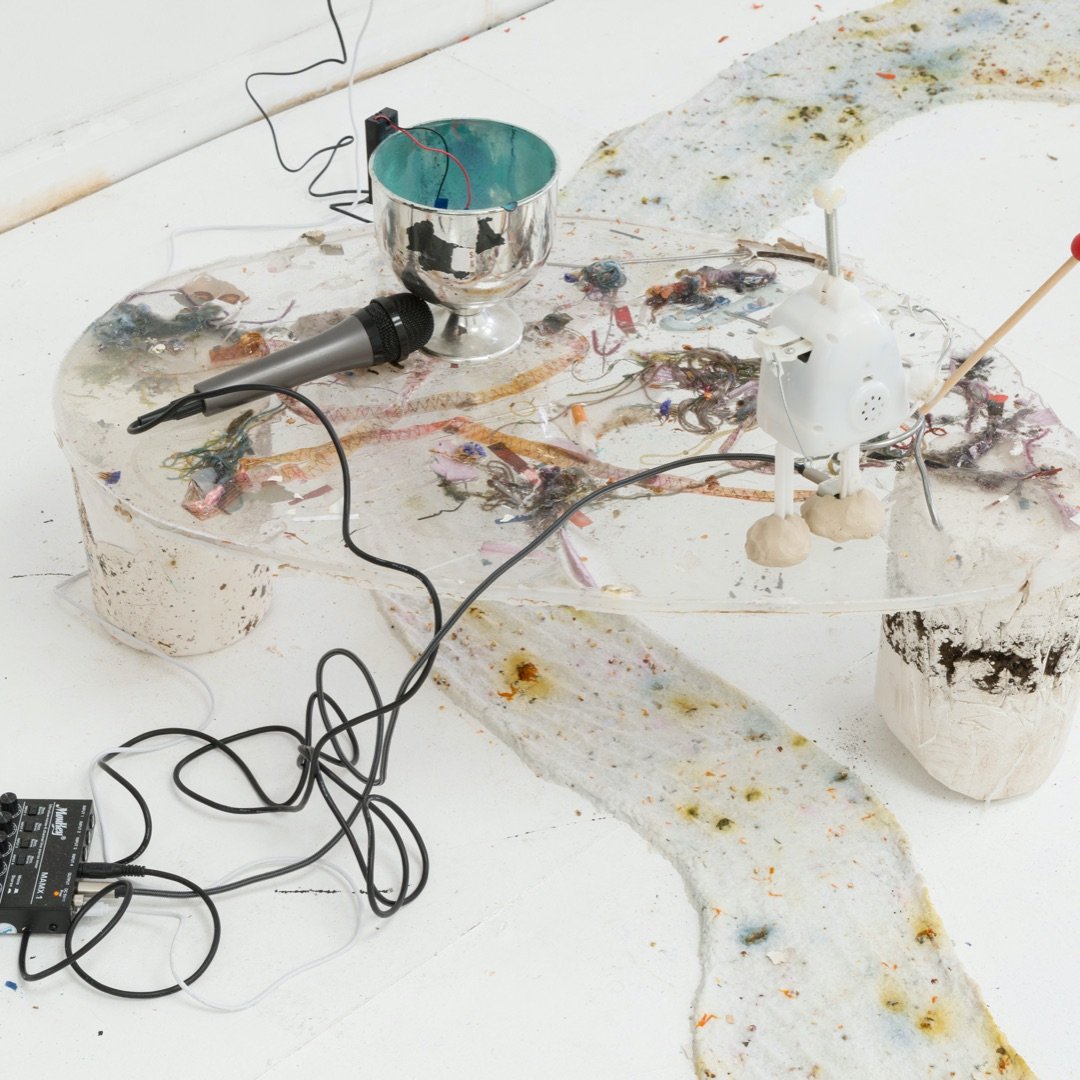 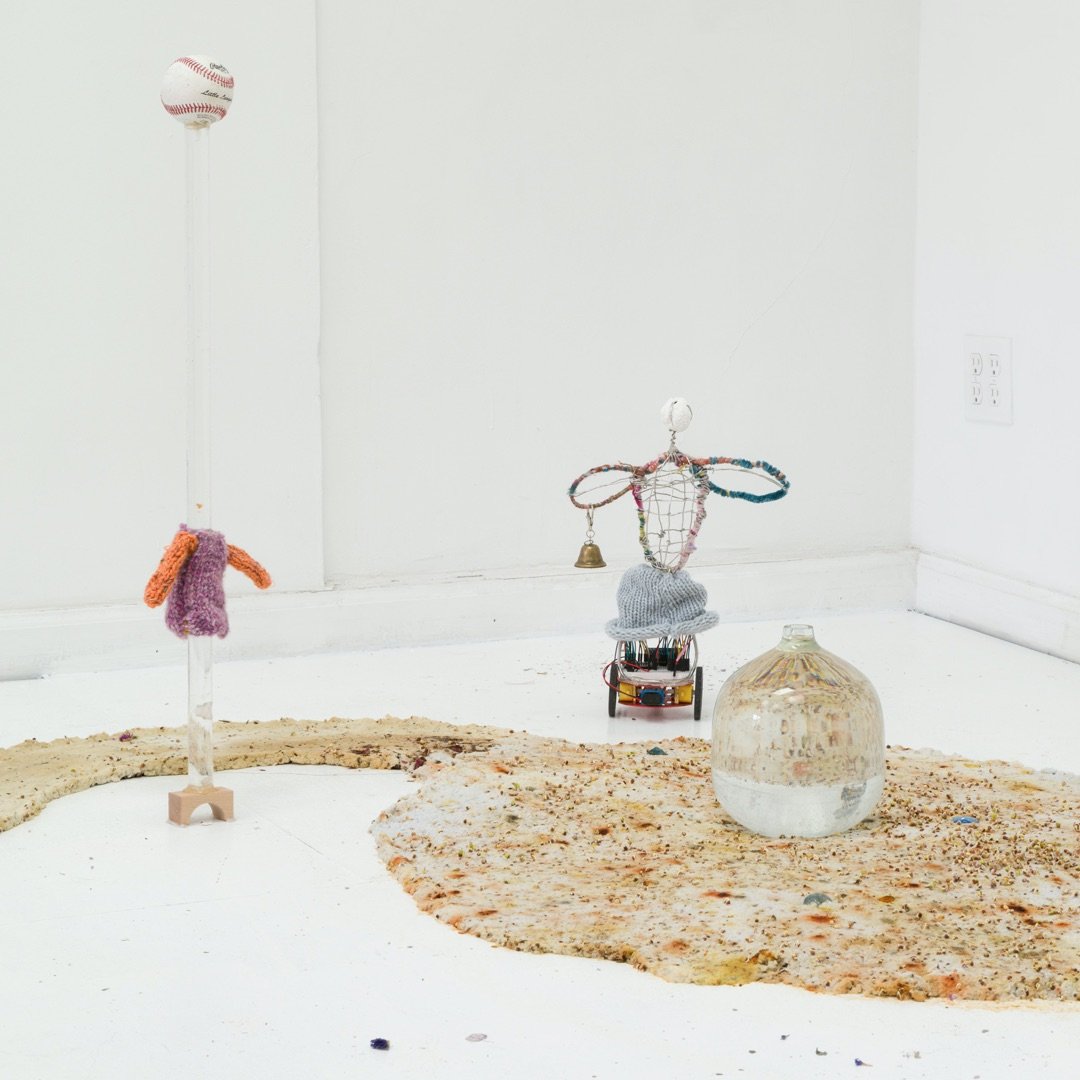 THAT: There is an aspect of intervention by you, the artist, as well as by gallery attendants for your installation (replacing/repairing various parts of the works). How do you gauge what aspects to touch or “fix” and what to leave on their own?
MP:  It really depends on what I am capable of at the moment. I prefer using the expression “helping” instead of “fixing” when I tinker with the works that are exhausted. Motors and sensors exhaust as they use torque force or batteries die out — just like we do. Our joints and bones get rusty and our endurance slowly decreases as we get older. Both machines and humans get to the point of exhaustion because we all have been working hard on this planet! To me, the word “fixing” implies that the object is broken, and fundamentally not worth existing. When working with kinetic sculptures, I realized it is important to acknowledge we all have a lifespan even if it is short like the 2 hours from a 3v battery. If I and the gallerist can offer another set of energy by replacing batteries, we will gladly do it. It’s also a bit about boundaries. I acknowledge I can’t stretch myself too thin to run everywhere to “fix” my broken work since they are all so demanding to stay alive. So to answer your question, I do what I can do to keep the work going and a big part of that is accepting the full cycle of the work's lifespan, which includes decaying.

THAT: What has been inspiring you lately?
MP: Printmaking and microcosms. I try to think of myself as an imagined daughter of Kiki Smith and Sarah Sze, although if they hear me saying this, both Kiki and Sarah would probably feel very weird. All I’m trying to say is they are brilliant artists that I can’t stop thinking about.

THAT: What's next for you?
MP: I would like to read all the books I have accumulated over the course of grad school out of rage because I really didn’t have the mental space for reading. I still read during the commute and before sleep but having my show at Lubov done and after graduating (which is coming up very soon), I’d be incredibly grateful for a small empty room in my headspace so I can soak up nicely written texts. 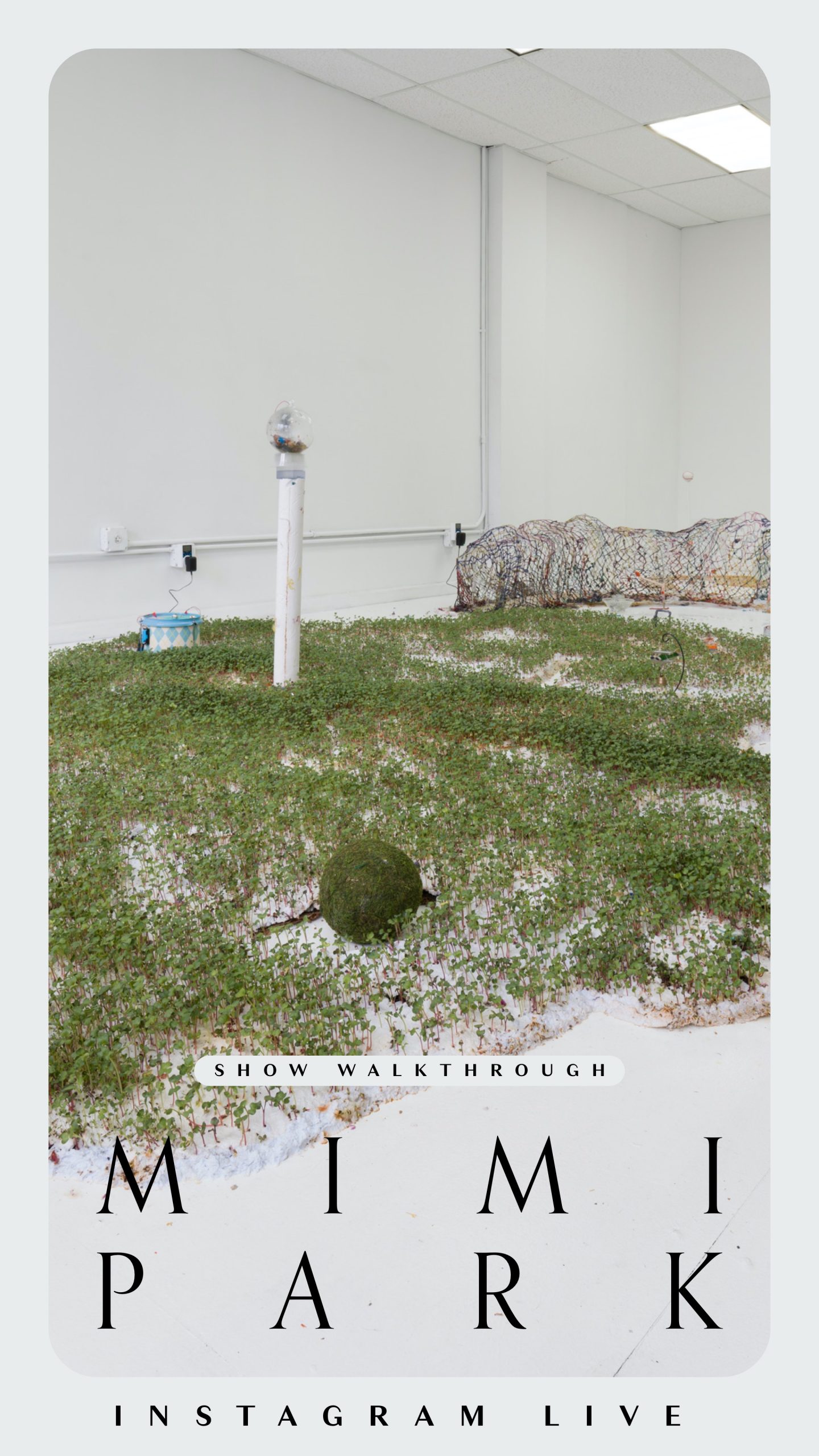